Kami[1] are a race of good or neutral native outsiders who are bound to a particular entity, be it an animal, a location, an object or a plant, referred to as a ward.[2]

In Minkai, spirit world creatures such as kami are collectively known as Yokai.[3] 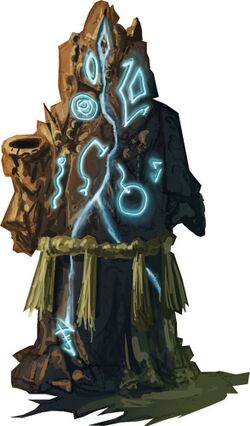 Kami were created by the gods when the Material Plane was young and tasked to preserve and protect places and things that could not protect themselves. On Golarion, the first kami appeared in what was to become Minkai in the Age of Creation. They are by far most common in that nation, but have spread throughout Tian Xia in the ages since. Because the kami are limited in number and proliferate slowly, they are rare outside Tian Xia, but hope to expand throughout Golarion in time.[4]

Some kami are so powerful they take on the power of a demigod: these are called kami lords.[5][6] One group of kami lords is said to dwell in Seseragi Forest, where Okirori Tomoko is said to have bartered for peace between the kami lords and the Warashi River.[7]

In Minkai, kami are venerated by the population regardless of a person's class or rank.[8]

Paizo Inc. published a major article regarding kami called 'Ecology of the Kami' in Forest of Spirits.