Tengus are a race of feathered humanoids with the heads of crows, and feet that end in sharp raptor-like talons,[1] native to Tian Xia.[2] 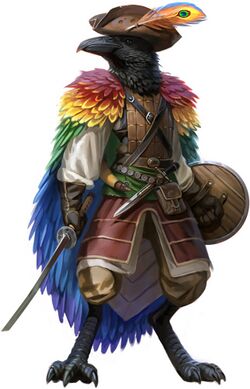 Tengus are feathered, most bearing black coats similar to crows and ravens, though brown and blue-black variants exist. Despite their bird-like appearance—and unlike the yamabushi tengus who resemble them—tengus lack wings or other natural means of flight.[1]

A tengu that leaves the ancestral homeland feels an intense pull toward adventure, to cross vast distances, collect beautiful treasures, and brave the challenges of combat or the rolling sea. Tengus often become rogues, bards, oracles, rangers, or swashbucklers.[3]

Tengus, like birds, reproduce by laying and inseminating eggs.[4] However, apart from their reproduction, beaks, feathers, and taloned feet, they have humanoid traits like fingered hands with opposable thumbs, and plantigrade legs.[1]

According to the jorogumo, tengus are believed to possess some kind of supernatural immunity to both the spider creature's venom and their mind-twisting magic. The truth of these rumours has never been ascertained, but what is certain is that the jorogumos possess an irrepressible hatred of tengus that drives the normally subtle hunters into a near uncontrollable murderous rage.[5] 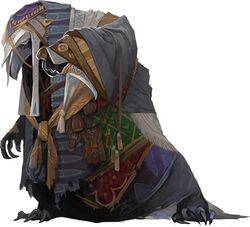 Tengu culture happily assimilates aspects of foreign cultures in the same way a crow would build a nest of different materials. Tengus revere their elders, finding long-lived tengus just as qualified to lead tengu society as highly experienced tengus. They primarily live in the slums of human settlements in the Shackles and the Sodden Lands, where they take up residence in abandoned buildings or condemned warehouses. In the tengu nation of Kwanlai on the continent of Tian Xia, most cities resemble poorly planned networks of slums. Most see them as little better than thieves and cutthroats, but tengus don't seem to mind, reveling in the attention it brings.[6][7]

Tengus have become popular amongst the pirates of the Inner Sea, due to a long-held belief that they can absorb bad luck. Known as jinx eaters, these tengus integrate themselves into the crews as best they can, although their position as glorified mascots keeps them from the worst depredations of life on the high seas. It is customary to have at least one tengu on a crew.[9]

Paizo published an article about tengus on pages 24-27 of Blood of the Beast.