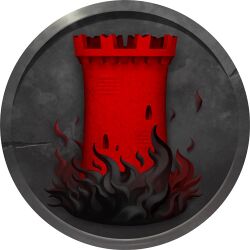 Symbol of the Order of the Pyre

Citadel Krane is the fortress-headquarters of the Hellknight Order of the Pyre, and can be found south of the Chelish city of Ostenso on Cape Erebus.[1][2]

The seaside fortress is built into the rising shore cliffs around a natural harbor, overlooking both nearby land and sea. Citadel Krane is the only Hellknight citadel that hosts its own fleet of warships. Its fleet consists of nearly three-dozen black-sailed heavy ships shod in dark metal and crewed by lightly armored Hellknights.[2]

The citadel hosts the Godless Gallery, a museum of unholy artifacts and cultic writings that either defy destruction or hold the potential to be turned against their blasphemous creators. Priestly signifers protect the library, granting access only to the order's lictor, master of blades, and paravicar. The order's signifers also maintain the "undoctrination halls" within the fortress's bowels, where they liberate the heretics or savages from the bonds of their false beliefs.[2]