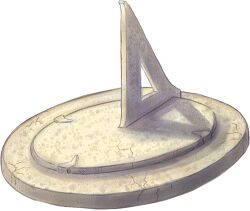 A sundial; still a popular way of telling time.

Absalom Reckoning, or AR for short, is the most commonly used calendar in Avistan and Garund and possibly all of Golarion. In Absalom Reckoning, the day of the month is always listed first, followed by the month and the year and generally suffixed with the letters "AR".

Absalom Reckoning takes its origin from the moment the god Aroden lifted the Starstone from the depths of the Inner Sea and founded the city of Absalom, an event dated to 1 Abadius, 1 AR. This event also ushered in the Age of Enthronement in which human nations began to be founded in the Inner Sea region inspired by Aroden's example.[1][2]

In Absalom Reckoning, each day on Golarion has 24 hours, each week has seven days, and each year has 52 weeks. A year is also divided into 12 months, although once every four years an extra day is added to the end of Calistril to make up for the slight variance in the planet's orbit around the sun. The last leap year was 4720 AR, and the next will be 4724 AR.[3][2][4]

Days of the week 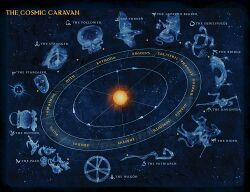 The Cosmic Caravan showing the months of the year.

Although most days of the week are assigned for work, a few also have other meanings in most Inner Sea region cultures.[2]

Months of the year

Each of Absalom Reckoning's months are associated with a specific deity.[2][4]

The Inner Sea region has four seasons: winter, spring, summer, and fall (or autumn). The months of Kuthona, Abadius, and Calistril are considered to fall in winter. Spring falls during Pharast, Gozreh, and Desna, while summer occurs during Sarenith, Erastus, and Arodus. Finally, Rova, Lamashan, and Neth are considered fall.[4]

Just as Absalom Reckoning is based on Golarion's orbit around its sun, some people and cultures use a lunar calendar that dates time using phases of the moon, and where each full moon is given its own name.[6]

Absalom Reckoning is by no means the only way of counting time on Golarion. On the continent of Tian Xia, the most common dating method is known as the Imperial Calendar, which began at the founding of Yixing, Tian Xia's first empire. As this happened exactly 2,500 years before year 1 of Absalom Reckoning, converting from one date to the other is quite easy.[7]