Known to her faithful as the Dawnflower, the Healing Flame, and the Everlight, Sarenrae (pronounced SAER-en-ray[1]) is a goddess who teaches temperance and patience in all things. Compassion and peace are her greatest virtues, and if enemies of the faith can be redeemed, they should be.[2] 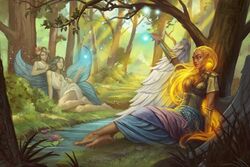 Yet there are those who have no interest in redemption, who glory in slaughter and death. From the remorseless evil of the undead and fiends, to the cruelties born in the hearts of mortals, Sarenrae's doctrines preach swift justice delivered by the scimitar's edge. To this end, she expects her faithful to be skilled at swordplay, both as a form of martial art promoting centering of mind and body, and so that when they do enter battle, their foes do not suffer any longer than necessary.[2]

According to the teachings of the followers of Asmodeus (whose motives should always be questioned), Sarenrae is one of the oldest gods in existence, having been created by Ihys, one of the two primordial deities in the time before time. She comforted Ihys when his brother Asmodeus castigated him for giving free will to mortals. Sarenrae served as Ihys's right hand in the first war between the gods, when the gods of chaos (led by Ihys) clashed with the gods of law (led by Asmodeus). In a rage, Sarenrae confronted Asmodeus when the Prince of Darkness slew Ihys and was nearly killed, but Asmodeus realized that he could never quench her resolution and that his battle was hopeless. He then abandoned the war and retreated to Hell.[3] According to the Windsong Testaments, Sarenrae was one of the first eight deities of this incarnation of the multiverse. She marvelled at the stars created by Desna, and chose some of them to give life so creation could begin.[4]

Near the end of the Age of Creation, when Rovagug descended upon the Material Plane to wreak havoc, Sarenrae took note and called upon an alliance of gods to oppose him. During this magnificent war of prehistory, the Dawnflower cast down Rovagug to the Dead Vault at the center of Golarion. It is believed that after Asmodeus bound the Rough Beast there, Sarenrae placed therein the raging flames of the sun as an eternal torment.[5][6][7] Sarenrae repaired the gash in the earth and commanded her followers to avoid the smooth scar that remained.[8]

During the Age of Anguish, her faithful living in nearby Ninshabur misinterpreted her instructions, however, and instead flocked to the area, eventually founding the settlement of Gormuz there. Believing Gormuz to be a holy city of Sarenrae, people from all over Casmaron flocked there for millennia, but were slowly corrupted by the imprisoned god Rovagug's dreams. Sarenrae continued sending portents and visions to her faithful in Gormuz during this period, but they were ignored or misinterpreted. She finally sent her herald Kohal to the people of Gormuz in -3923 AR, but they had been so corrupted that they destroyed him instead. In great wrath, Sarenrae was tricked by Rovagug into smiting Gormuz with her scimitar, destroying it completely, and created an enormous rent in the earth that eventually became known as the Pit of Gormuz. Upon seeing that her mistake had excavated Rovagug's prison and allowed all kinds of monsters, including Ulunat, the first Spawn of Rovagug, to disgorge themselves on Golarion's surface, Sarenrae learnt a valuable lesson in espousing redemption over wrath.[8]

Sarenrae's realm of Everlight appears as a sun hanging at high noon in the sky of Nirvana. Her servitors gather there to plan their crusades without fear of espionage, as those who seek do do evil are banned from the realm. Sarenrae occasionally takes human form to walk the streets of High Ninshabur, learning from the less fortunate and reminding herself of her responsibility to care for the Great Beyond.[9][10] 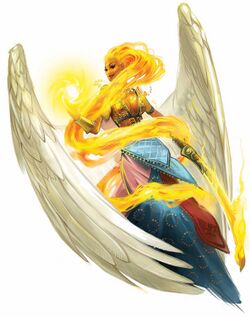 A common depiction of the Dawnflower.

Sarenrae manifests as a bronze angelic beauty with golden hair composed of flowing flame. She emits a holy light which trickles down like liquid luminescence from one hand, while the other holds a scimitar emblazoned with radiant fire. Her holy light provides healing and sustenance, while the scimitar creates gusts of winds that remove disease and fear.[11]

Sarenrae counts all non-evil gods as her companions, and even communicates with evil deities in the hopes of converting them from their dark ways, although certain tradition-bound deities like Torag distrust the Dawnflower and her flock, seeing their willingness to forgive as a weakness.[12][13] She is known to be in a polyamorous relationship with Desna and Shelyn.[14]

While Sarenrae believes in redemption, she understands that certain beings are irredeemable, including her only true enemy Rovagug and ironically Asmodeus, who once worked with her to imprison Rovagug. Sarenrae's hope that their cooperation would lead him to redemption never came to pass, and now she regards Asmodeus in the same category as Rovagug. Their rivalry goes much farther than their constant battle over souls.[11][15][13]

Sarenrae shows her approval by sending doves, or the unusual appearance of ankhs. She indicates her disfavor through unexplained sunburns or blindness that can last from minutes for minor transgressions to an entire lifetime for the worst offenses.[16]

Sarenrae has numerous angelic servants. Among these are her divine servitors, the yhohm, who are said to be born from a portion of phoenixes' souls every time they are reborn in fire.[17]

Bryla
This servant of Sarenrae is manifested as a wheel of flaming sunlight.[11]

Charlabu
Charlabu is a gold-colored hound archon that often appears in a canine form.[11]

Mystmorning
This servant of the Dawnflower is an intelligent animated blade and possesses the same powers as that of a celestial unicorn.[11]

Sunlord Thalachos
Her herald is a platinum-skinned angelic minion that is escorted by 11 divine doves.[11] 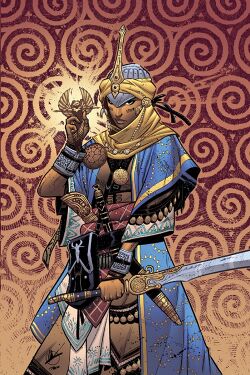 Kyra, a cleric of Sarenrae.

The church of Sarenrae is mostly composed of altruistic priests who are also ready to be stern should it be warranted. The church is known for blessing crops, healing the sick, and reforming criminals and evil doers. They are often consulted to solve feuds and disputes among neighbors and families.[11] The Empire of Kelesh holds her as their patron deity and is responsible for spreading her faith throughout the Inner Sea region.[18] Here she is worshiped primarily in Absalom, Katapesh, Osirion, Taldor, Thuvia, and of course Qadira,[16] and among Garundi,[19] Keleshites,[20] Taldans,[21] Varisians,[22] halflings,[23] and half-elves throughout the Inner Sea region.[24]

The Cult of the Dawnflower is a militant sect of the church that is popular and influential in Osirion and Qadira.[25]

Kind and caring halflings often worship Sarenrae, tending to the sick and elderly. Rarely, a halfling may be born with red hair and, as this is seen by halflings as a sign from the goddess, these halflings are expected to become part of Sarenrae's clergy.[26] Sarenrae is also one of the most popular deities worshipped by the strange planar race known as duskwalkers.[27]

Knights of Sarenrae identify themselves by wearing white scarves around their helms and wielding the scimitar. They are willing to offer mercy to those enemies who seek absolution and renounce evil.[28] 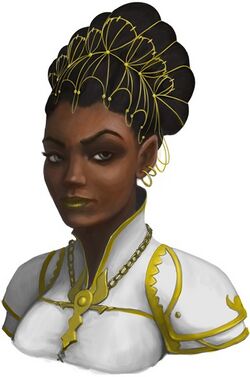 A large portion of Sarenrae's priests are composed of clerics, but within their ranks are also paladins and rangers, as well as a few druids and bards. Some priests work as personal retainers or healers for the wealthy, while others survive on assistance from congregational worshipers. A common form of worship by priests is to awaken with the dawn and give thanks and praise to the rising sun. The scimitar is a favored weapon and its use is held in high regard,[11] and it is often decorated with sunburst images in red and gold.[16] In battle, Sarenrae's clerics become dervishes, ready to destroy irredeemable corruption.[15] Formal raiments include a long white chasuble and tunic with red and gold decorations depicting the sun. Worship leaders often wear a golden crown topped by a red-gold sunburst.[16]

The main temples of the Dawnflower are open-air buildings, although side buildings have ceilings. Many have brass or gold mirrors that refocus the sunlight on the main altar.[16] Priests often travel from one temple to the next. The Everlight Oasis in Kelesh is a popular site of pilgrimage for followers of the goddess.[18] Church services are held outdoors and are joyous affairs that feature singing, dancing, and music.[11]

The Birth of Light and Truth is the principal holy book of Sarenrae.[11] It is customary for every owner of this book to inscribe her own uplifting stories in the last few blank pages, so that they can be recounted to others later.[16]

The peoples of the Inner Sea region did not always worship Sarenrae. Her faith spread along the Keleshite trade routes during the early years of the Age of Enthronement, touching off much instability in Garund.[29]

The most commonly celebrated holidays celebrated by the followers of Sarenrae are Burning Blades on the 10th of Sarenith, and the Sunwrought Festival, held on the summer solstice.[30] The month of Sarenith is named in her honor.[31]

The Dawnflower anchorite travels throughout the wilderness, fighting evil and offering redemption, while devoting herself to the greatest of Sarenrae's blessings: the sun.[32]

Anchorites focus their studies on a personal credence through which they develop and express their faith, whether it takes the form of generating magical light or flaming weapons.[32]

Gods are often associated with certain animals, either because they possess a quality favored by the god, or because the god's faithful feel a special kinship to them. Sarenrae's favored animals include the dove, the falcon, and basking lizards.[33]

The Dawn Vigil is a small band of Sarenite paladins who guard the Katapeshi town of Solku from gnoll attacks.[34]