Darl Jubannich was a Galtan philosopher who wrote the broadsheets On Government in 4662 AR, a radical manifesto that exposed the Chelish government's betrayal of humanity, and undermined the divine right of kings. Instantly popular among the dissatisfied masses, the manifesto inspired the Red Revolution in Galt in 4667 AR,[1][2] as well as the growing movement for Andoren independence which resulted to the People's Revolt in 4669 AR.[3] After the Chelish-backed government of Galt tumbled, Jubannich, together with the revolutionary philosopher Hosetter formed the Revolutionary Council to run the country. Even though they had the loftiest goals for Galt, the Revolutionary Council quickly spun out of control, becoming paranoid and tyrannical, and executing anyone who dared oppose its authority. The council soon collapsed, replaced by newer and even more radical revolutionaries. Hosetter was executed by one of the final blade guillotines he had commissioned, while Jubannich fled for his life to Andoran.[4]

Popular history holds that the avoral Talmandor saw the great evil of House Thrune rising in Cheliax and dictated the words that Darl Jubannich wrote in his famous manifesto.[5] 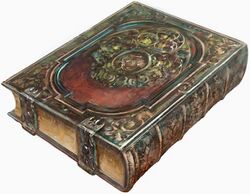 A copy of The Alchymical Wedding: A Masque of Allegory, by Darl Jubannich.

Even though Jubannich is best remembered for his political manifesto, On Government, he was also a poet[6] and allegorist.[7]

He frequently wrote of Thais, the herald of Cayden Cailean, whom he referred to as Cerulean Liberty. Jubannich said that her blue wings symbolized skies cleared by the sacrifices of the revolutionary martyrs.[6] He also authored The Alchymical Wedding: A Masque of Allegory, a parable that uses the metaphor of a royal wedding to make points about both philosophy and alchemy.[7]