For another meaning of "Andoran", please see Andoran (faction).

Andoran (pronounced ann-DOHR-ann)[1] is a nation of the people, governed by the principles of Common Rule which grant every citizen a voice. Andoran holds the reins of its own destiny in the strong hands of its people; it considers itself the birthplace of freedom.[2]

Andoran is located on the northern coast of the Inner Sea. The nation is separated from its western neighbor, the empire of Cheliax, by the Aspodell Mountains. The Five Kings Range perform a similar function in the north, serving as a barrier between Andoran and the nations of Druma, Isger, Kyonin, and the Five Kings Mountains. To the east lie the nations of Galt and Taldor; much of Andoran's eastern border lies within the Verduran Forest, and follows the flow of the Sellen River.[3] The nation can be divided into five general regions: the capital city of Almas and its surrounding countryside, the coastal Arthfell region, the agriculture-rich Carpenden Plains, Darkmoon Vale, dominated by the Lumber Consortium, and the fey-contested Verduran Forest.[4]

Andoran's interior is dominated by plains and hills, and the remnants of Arthfell Forest. Darkmoon Vale in the northwest is dominated by Droskar's Crag, a massive volcano that serves as the southernmost point of the Five Kings Range.[3][5]

The Taldan Fourth Army of Exploration explored and mapped the region in 1683 AR.[6] Impressed by the area's abundant forests and other natural resources, Taldor invaded in 1707 AR. Under the command of General Khastalus of Corentyn, the native peoples were put to the sword and Andoran became the westernmost province of the great Taldan Empire. The coastal city of Augustana was founded the same year, and the new invaders quickly began felling the trees of the extensive Arthfell Forest to feed the rapidly expanding Imperial Navy. By 1750 AR, nearly all Taldan vessels were built in Augustana. The rise of the Andoren navy and shipping industry began a new golden age of exploration for Taldor, eventually leading to the founding of colonies not only in Avistan and Garund, but also far-away Azlant and Arcadia.[3][7][2][8]

The forests of Andoran were not the only things that Taldor exploited. In order to launch its disastrous Sixth Army of Exploration, the Taldan government conscripted thousands of local Andoren militia members, and sent them off on commandeered ships to Garund. Most died over the course of the next nine years, and Taldor's ill-advised attempt to lay claim to central Garund finally came to a calamitous end with its defeat by the forces of the Gorilla King in 2089 AR.[6][9]

In the year 4081 AR, the region cut its ties with the Taldan empire. The move was prompted by Aspex the Even-Tongued of Cheliax, who sought to add the region to his fledgling empire in what would become known as the Even-Tongued Conquest. Facing challenges of corruption and decadence from within, as well as an invasion by Qadira across the empire's southern border, Taldor was forced to cede Andoran to Cheliax without a single battle.[3][7][2]

Under Cheliax's rule, Andoran flourished for hundreds of years. Merchants in towns and cities grew rich exploiting the country's bountiful natural resources until their power rivaled that of the hereditary landed nobility. Despite its economic success, the nation still had its share of challenges: hobgoblin attacks in the northwestern wilderness, pirates on the open seas, druidic and fey troubles in the Arthfell and Verduran Forests, and disrupted trade with its colonies in Arcadia. These setbacks were temporary, however, and did little to deter the nation's growth.[2] 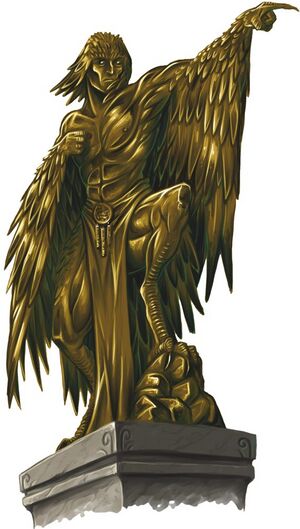 Andoran prospered as a part of the empire of Cheliax until 4606 AR. The death of the empire's patron god, Aroden, resulted in a power struggle among the nation's various noble houses. This civil war ended with House Thrune claiming control of Cheliax in 4640 AR.[3][7][10]

House Thrune, a noble line dedicated to the service of infernal powers, demanded strict obedience and servitude from the citizens of the empire. Initially the ruling body of Andoran followed the mandates of Cheliax's new queen, judging that the populace was not ready for another conflict after three decades of civil war. There was only so much obedience to Egorian that the Andoren people could stomach. After nearly thirty years of infernal dominance, the People's Revolt erupted in 4669 AR. Andoren merchants rallied the common folk behind the egalitarian principles of the Galtan philosophers Darl Jubannich and Hosetter and declared their independence from the empire, casting aside the noble class' right to rule and establishing rule by the will of the people: the Common Rule. Unlike in the later Red Revolution in Galt, the Andoren firebrands did not demand the death of all nobles, instead offering them a choice: remain as citizens of the Inner Sea's first democracy, or be exiled. Their lands and holdings became property of the state in either case and were immediately sold off to those who had supported the People's Revolt.[3][11]

The newly established nation abolished the practices of slavery and servitude, and embraced the belief that all are equal. These ideals were codified in the Associative Act of 4669 AR, written by the first members elected to the People's Council (see Government below). The act safeguarded not only the legal rights of citizens, but also enshrined a progressive economic emancipation. Andoran continues to embody these ideals to this day, concepts they attempt to force upon other nations with what many feel to be idealistic and imperialistic fanaticism.[3][11]

Soon after its founding, a contingent of gillmen visited the newly established democratic nation. They presented the government with the keystone of the Arch of Aroden, which they had dragged there from the bottom of the Hespereth Strait, symbolizing their support for Andoran's commitment to freedom and equality. The gift was incorporated into the Archstone Monument and placed near the western end of the Field of Concord in Almas. [12]

In 4716 AR, Andira Marusek was elected to succeed Codwin I. Coming from a background in both the Twilight Talons and as the general of the Steel Falcons, she is one of Andoran's youngest Supreme Elects and has made international abolition a principal tenet of her administration.[13]

Andoren government (and Andoren society as a whole) are built on three principles: the tolerance of all benevolent religions, a transparent government, and an efficient, prosperous system for trade.[11] To ensure that all are treated fairly and that no one abuses the power of their office, public servants in Andoran are regarded with a measure of suspicion and subject to regular scrutiny.[3]

The nation's ruling body is a group of 350 representatives known as the People's Council. Based out of the capital city of Almas, these individuals are elected by the nation's populace every five years; Andoran is divided into numerous municipalities, each of which is allowed to elect a single representative to the Council. Additionally, every major guild in the nation is also granted a representative. It's these individuals that are responsible for overseeing all aspects of the nation's government, from the selection of mayors for each municipality to the running of Andoran's military forces.[3][14]

The People's Council is led by the Supreme Elect, a position appointed by the Council's members following each election. The Supreme Elect manages the nation's Executive Office, and acts as the mayor of Almas. The People's Council also selects a supreme vicar from the local clergies of Abadar and Erastil. This individual serves primarily as an adviser to the Supreme Elect. The supreme vicar also acts as the bishop of Almas, and oversees the actions of all Andoran's faiths.[3][15]

Being the only country in the Inner Sea region with open, democratically-elected leaders, Andoran's relations with its more autocratic neighbors is generally poor. Foreign powers worry that their peasantry might desire freedoms similar to those earned by the people of Andoran as a result of the People's Revolt. This fear is reinforced by Andoran's efforts to spread its cultural, mercantile, and philosophical beliefs beyond its borders. The nation even exhibits a willingness to bring its military might to bear when no other means of accomplishing this goal remain.[3][16][2]

During the People's Revolt, revolutionaries opened all of Andoran's prisons and freed its slaves, partially on ethical grounds, and partially to bolster the Revolt against foreign and domestic anti-revolutionary forces. These abolitionist ideals continue to this day, with the Andoren government forbidding any trade in sentient creatures, as well as sending out agents to undermine slavery abroad. This brings Andoran into conflict with the primary states supporting slavery in the Inner Sea region, particularly Cheliax, Katapesh, Osirion, and Thuvia. Because of this, Andorens in general are seen as troublemakers abroad.[2] Katapeshi slavers in particular has been in the crosshairs of the Andoren government for the past decade, after Codwin I and the People's Council made it legal to board and sink Katapeshi slave ships in 4704 AR. When the Gray Corsairs sank three of these ships the following year, it began what some call the Andoren War Against Slavery.[17]

Andoran is a nation with abundant natural resources, and transport ships carrying lumber, minerals, and other goods frequently leave the cities of Almas and Augustana for destinations throughout the Inner Sea region and beyond. Additionally, the nation's three leading exporters, House Goldfield, House Naran, and House Vaylen, operate large and profitable banks within the region. Andoran's banks provide readily accessible and affordable credit to the nation's people, though any who seek to exploit this system are exiled as traitors.[3][18]

Andoran profits from resources beyond its borders as well. Artifacts and resources originating in exotic locations such as Osirion, the Mwangi Expanse, and even Azlant and Arcadia are gathered and sold. These goods are sometimes rare, often difficult to locate and obtain, and many groups fight one another to possess them; despite the risks involved, these items generate significant wealth for Andoran. Competition in this field has also been growing with the neighboring states of Cheliax and Taldor.[3][2]

The human population of Andoran is primarily of Chelaxian and Taldan extraction, with halflings the most common non-human race.[19][20][21] Andoran also has the largest concentration of kobolds in the Inner Sea region, and one of the biggest number of aasimars.[22]

Above all else, the citizens of Andoran are passionate about their country and their freedom. A history of being ruled by foreign powers, first under Taldor, and then Cheliax, resulted in a heavy burden; over time, as the region's resources and the people's independence were slowly worn away, this burden grew too great to be tolerated any longer. The proud people of Andoran claimed their nation's sovereignty, and are determined to prove to disbelievers that the concepts of freedom and equality that they hold will remain strong in the face of any hardship.[23]

The people that inhabit the nation of Andoran are also highly opinionated, often holding differing perspectives on how best to preserve their nation and spread its influence. That said, almost all Andorens share certain beliefs in common. Arguments and discussions should be based on merit, rather than half-truths or falsehoods. All people have a right to have their voice heard, and one should be judged by their actions above all else. Everyone is entitled to their opinion, so long as it is not actually that of a foreign power. By embracing and preserving these beliefs and others like them, the people of Andoran hope to ensure Common Rule, and the freedom it brings, for many generations to come.[23]

As a former province of Taldor, most Andoren humans speak the Common tongue, Taldane.[2]