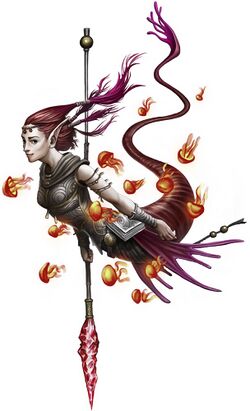 Jellyfish swim alongside a merfolk.

Jellyfish[1] are translucent, aquatic creatures consisting of a wide, gelatinous bell trailing several long, poisonous tentacles. They are carnivores, although most types of jellyfish are too small to threaten humanoids. However, they can potentially become very dangerous when they gather in large swarms, something that is known to occur in spring or as a response to conditions such as increasing ocean temperatures. These jellyfish swarms do not actively seek out larger creatures as prey, but will strike opportunistically when potential targets enter into the nearly invisible swarm. Despite their name, jellyfish are not true fish.[2]

While most jellyfish only reach small sizes, several varieties are known to reach considerable sizes. Giant jellyfish, unlike their smaller relatives, are often active hunters of humanoid-sized prey. Multiple distinct varieties of giant jellyfish are known to exist, often varying in size and possessing different abilities from one another.

Multiple creatures similar to jellyfish exist throughout Golarion and the Great Beyond. The components of swimming eye swarms are bizarre, deep-ocean entities resembling jellyfish with an eyeball suspended in their mesoglea, which serves both to generate poison and as a sensory organ.[4] Whyrlishes are creatures resembling enormous jellyfish native to the Astral Plane, where they feed on the metaphysical energies of the River of Souls.[5] Merlucents are a species of half-human, half-jellyfish aberrations.[6]

Whaler jellyfish are among the predators drawn to the Antarkos Ocean by the abundant fish and krill found there.[7]

The Plane of Water is home to diminutive bathysphere jellyfish, which can produce breathable air within their bells and are occasionally used as naturally-occurring breathing devices by air-breathing visitors to the plane.[8] Additionally, a kelp forest within the plane is home to the Lion's Mouth, a sapient jellyfish-like entity composed of billions of perceptive organs.[9]