The Antarkos Ocean, sometimes called the Ocean of Frozen Dreams, is the largest body of water on Golarion and covers most of the planet's southern hemisphere. No continental landmass lies at Golarion's southern pole, though a vast polar ice shelf provides solid ground at the world's southernmost reaches.[1][2] 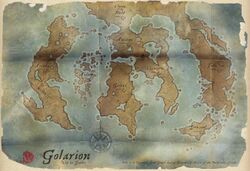 A great ice shelf covers the ocean at the South Pole, with the southern aurora frequently visible at night. The currents constantly create holes in the ice and calve off icebergs that float north to threaten shipping.[1] These icebergs range from the size of a house to thousands of feet across, and most of their mass is hidden below the water's surface. This makes them particularly dangerous to ships, since vessels can run aground on icebergs that appear hundreds of feet away. Icebergs are also prone to flipping unexpectedly, creating enormous waves capable of capsizing even the largest vessels, and have even been known to explode. The latter occurrence can happen when the cold melt-water of the iceberg mixes with warmer waters as it drifts north. A particularly large iceberg, nicknamed the Antarkos Bear by sailors, has been drifting north for over a decade. Despite these dangers, icebergs are generally composed of fresh water, allowing sailors to harvest them and resupply their vessel's water supply.[3]

Most icebergs are white or pale blue in color, but can be clear or opaque, and even striped, glassy, or tinted. A pair of icebergs, one pink and the other green have been following each other for years for unknown reasons. Spotted by sailors, they are thought to be sacred to the empyreal lord Pulura, and are said to hide a powerful artifact sacred to her.[3]

In the northern reaches of the Antarkos, where it borders the world's other oceans, the waters are plagued by storms and powerful currents; the waters between the Antarkos and the Valashmai Sea are especially deadly. Icebergs break off the ice pack into the turbulent waters, where brave sailors from Southern Garund hook ropes to them and tow them to port to provide the wealthy with harvested ice.[1]

Aquatic mammals are common in the Antarkos Ocean, especially whales, which are hunted by both the natives and northern sailors.[1] The ocean is also home to vast numbers of fish and krill, which provide food for a great variety of large predators; besides whales, megalodons, camerocerases, whaler jellyfish and basilosauruses are all found in the Antarkos ocean. A settlement of kalo who were transported to Golarion from Kalo-Mahoi in a magical accident also calls the depths of the Antarkos home, having now lived there for several generations.[3]

Ghosts and animate dreams, even those from far across the world, are drawn to the Antarkos Ocean for reasons unknown. Speculation abounds as to the reasons for these phenomena, ranging from a powerful artifact to a dimensional portal usable only by incorporeal creatures.[1]

The ice sheets host a variety of life of their own, including large penguin colonies, polar bears, leopard seals, winter wolves, glacier toads, frost worms and frost drakes. A handful of humanoid creatures live on the ice pack as well. The most common are a degenerate race of ice trolls who hunt whales and worship the auroras. When food is scarce, the trolls trade with a mysterious race of aquatic giants who live in the deep waters. These giants have strange psychic powers, which they use to enslave the thoughts and dreams of surface dwellers. The Antarkos ice sheet is also home to a single white dragon named Syrranelzon, who lairs in an ice cave defended by a tribe of adlets he has enslaved.[1][3]

Paizo published a major article on the Antarkos Ocean in Aquatic Adventures.