A strange mixture of bear and owl, owlbears are ferocious killers whose first instinct is to attack anything they see. Adults stand eight feet tall when rearing up on their hind legs, and weigh up to 1,500 pounds. They are of animal level intelligence.[1][2]

The origins of this strange race are a subject of debate amongst scholars. Perhaps the most widely accepted tale is that of the Spurned One, a mysterious creature who according to legend created all kinds of monstrosities using transmutation magic, possibly learned from the dark fey. Most of these creatures died soon afterwards, but the owlbears escaped and were able to breed true.[3]

Another theory is that a magical accident occurred when a wizard with an owl familiar summoned a dire bear in an area with strong background transmutation magic. This "arcane dislocation" resulted in the creatures merging to form an owlbear. Obviously this would have had to have happened more than once in order to create a new race, and the theory also has to explain what happened to the rest of the owl and the bear—no one has ever seen a "bearowl" made up from the parts which were not used in the owlbear.[3] 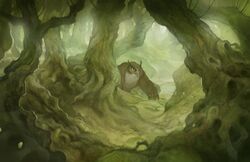 A lone owlbear roams a forest.

Owlbears mate for life, and even if one partner dies, the other may retain the body for some time afterwards. They lay eggs, and the hatchlings become adults after two years. The parents become even more ferocious in defence of their young, if such a thing is possible.[7]

The vast majority of owlbear encounters are with solitary adults or a mated pair, although they band together in packs of up to eight. This can be due to a particularly powerful owlbear temporarily gathering together a gang of lesser followers. These packs may also form in response to being hunted; this makes the occupation of owlbear hunter even more dangerous than it otherwise would be.[7]

Eggs and young owlbears are sought after commodities that can fetch a high price. As a result, some hunters specialise in obtaining them. It takes a great deal of courage—or recklessness—to train an owlbear, and not much less to employ one as a guard creature. The beasts are strong-willed, unpredictable, and ferocious, and many an "owner" has been savaged by his "tame" owlbear. These qualities make orcs the best trainers of owlbears, and orcs respect and admire the creatures' savagery. Orcs wear the scars of owlbear attacks as a mark of honour, and owning an owlbear grants high status in the tribe.[7] Some orcs even go so far as to ride owlbears into battle.[8]

Arctic owlbears have white fur and feathers, and are excellent swimmers.[10]

Darklands owlbears are albino, darkness-adapted relatives of the more common surface owlbear, generally found in the tunnels and caverns of Nar-Voth, but also in the layer of Sekamina, where the drow charm them for domestic and guard duties.[10]

Fruss owlbears have longer feathers than standard owlbears, and are able to glide for short periods.[10]

Great hooked-claw owlbears live in the Shafts of Lebb. They have oversized claws which make them competent climbers.[10]

Screaming owlbears live in the Maelstrom, and have mutable bodies.[10]

Shokuran owlbears hail from the Tian Xia kingdom of Shokuro and have a unique black and white colouring.[11]

Siege owlbears are powerful creatures, bred by orcs from the most formidable of ordinary owlbear stock and fed a diet of magically and alchemically-treated meat. They are larger than normal owlbears, and strong enough to carry small siege engines onto the battlefield.[10]

Sleeyk owlbears are less physically powerful than standard owlbears, having been bred for speed and agility rather than strength.[10]

Slime owlbears were first reported in the Dungeons of the Mire Queen. Their fur is coated in green slime, which does not appear to harm the owlbears but is more than capable of damaging others who come into contact with it.[10]

So-called sloth owlbears have some of the characteristics of sloths. They are slow, but capable of moving through the trees and hanging from branches in order to drop onto prey.[10] 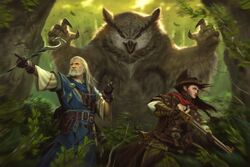 Owlbears can be unexpectedly stealthy.

Owlbears prefer to live in temperate forests, such as the Verduran Forest of Andoran,[1][12] or the Heartlands forests of Cheliax.[13] They are most common in the Hold of Belkzen, where the orcs consider them to be holy and will not attack them. (The owlbears, of course, have no such compunctions about attacking orcs.) The Brimstone Haruspex is guarded by particularly huge owlbears. The Wild Beast, one of the spirits revered by the Varisians, resembles a ghostly owlbear.

A pack of apparently ghostly owlbears haunts the Estrovian Forest in Mendev on snowy nights. The bodies of any slain owlbears disappear with the dawn.[14]