This article covers the family of creatures known as rakshasas. For the specific type of rakshasa formerly simply referred to as "rakshasas", see raja rakshasa.

Rakshasas, the "earthbound evils", are spirits of truly debased and abhorrent evil who take on humanoid-like form.[1][2][3]

The origin of the rakshasas lies long ago, in the land of Vudra. The human sorcerer Mahka Abihcara, obsessed with his own mortality, desired to continue his enjoyment of material pleasures for all eternity, and so he resolved to live so much that his essence would continue on past his death in a cycle of reincarnation. Mahka became a patron of the arts, a conqueror, and ultimately a cannibal, consuming the bodies of his foes to absorb their life forces. Finally, when he grew too old for his magic to keep him alive any longer, he and his chief generals partook in a feast in which they each devoured a totem animal that, he said, would guide them to their next lives as more powerful beings. Mahka himself consumed a tiger, and ate himself to death.[4]

Twenty years later, a young sorcerer named Purusav Vagbha appeared, seeking out Mahka Abihcara's generals and killing them and their totem animals. Purusav reconquered Mahka's empire, and it soon became clear that he was in fact Mahka's reincarnation, and far more evil and powerful than before. Ultimately, Gopa Citrasena, one of Mahka's generals who rejected his master's evil ways, slew Purusav in an great battle in which it was revealed that Purusav was a tiger-headed monster with backward-bending hands: the first rakshasa.[4]

Unfortunately for Vudra and the world, Mahka and his generals continued to reincarnate, and as Mahka's foul philosophy spread, more evil souls have come into being as rakshasas. The earthbound evils continue to plague Golarion.[4] 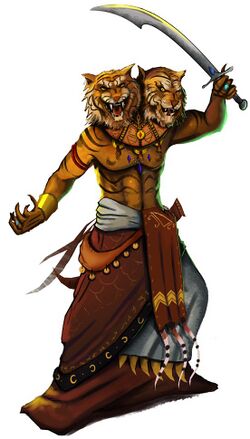 The known "species" of rakshasa are as many ranging from relatively weak raktavarnas, seen as failures, to the pinnacle of their species, the maharajas. A rakshasa's physical species is independent from its caste, or role in society (see Society).[5]

Feral traits and strangely reversed joints are a hallmark of all types of rakshasas, features that most rakshasas can hide through their supernatural ability to change shape or by means of powerful illusions.[2] More powerful rakshasas often have multiple heads, grown during horrific rituals in which the rakshasa steals the soul of another fiend.[6]

Rakshasas are born on the Material Plane, but they are not of it. They possess the powers and shapes of fiends, but their fates are inexorably tied to the mortal world, and it is there that they seek to rule. The reincarnations of manipulators, traitors, and tyrants obsessed with earthly pleasures, rakshasas embody the very nature of materialistic evil. After dying violent deaths, these spirits are so tied to worldly decadence and selfish concerns that they take shapes that better reflect the baseness of their lives and are reborn as fiends.[2]

A rakshasa cannot impregnate another of its own kind, and so new rakshasas come into being via the coupling of a rakshasa and a non-rakshasa or, rarely, that of two non-rakshasas. A rakshasa born to non-rakshasa parents generally only occurs when one or both of the parents commits a great evil during the mother's pregnancy, allowing the disembodied spirit of a previously slain rakshasa to reincarnate into the world by usurping the unborn offspring's body. Rarely, such blasphemous births afflict good or innocent parents, typically in cases where the parents are exposed to great evils beyond their control. A rakshasa grows to maturity more quickly than a human, and often functions as a full-grown adult earlier than age 14. Despite this quick maturation, a rakshasa can live for 500 years or more before dying, at which point its spirit seeks a new host to be reborn in, continuing the vile cycle of fiendish reincarnation over and over again.[2]

Rakshasas believe that each and every creature in the universe has a proper role to play, and that success comes from understanding one's position and working to improve it.[2]

Rakshasas born to non-rakshasa parents (or to a mixed parentage in which its rakshasa parent keeps its nature secret) seem like normal children at birth, but are aware of their nature as spirit creatures even before they can speak. Vudrani greatly fear such parivaka (devil-children) and use divination to ensure that their children are clean of soul, but such prognostications are not foolproof, and rakshasas are master deceivers even as children, leading to a high rate of survival. Such mortal-born rakshasas are quickly sought out by other rakshasas and brought into the fold.[7]

Rakshasas born among their own kind, on the other hand, grow up similarly to normal mortals, but are instilled with hatred for non-rakshasas and unyielding loyalty to their parents. They are encouraged to emulate and deceive non-rakshasas as practice for adulthood.[7] 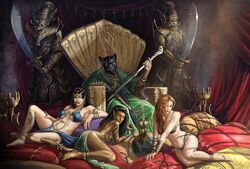 A rakshasa rules over lower beings.

The rakshasa caste system is as follows, from lowest to greatest. The system encompasses not just all of rakshasa society (regardless of the rakshasa's physical type), but all of life—although only rakshasas can attain the stations of darshaka and above.[2][8]

While rakshasas are forced to admit that the gods have powers greater than their own, most rakshasas scoff at the concept of divinity as a whole. The gods are among the most powerful beings in existence, to be sure, but too many examples of powerful, ambitious, or merely lucky mortals attaining divinity exist for rakshasas to pay religious homage to such creatures. Rakshasas see their own transitions from mortals to otherworldly beings as marks of their own fathomless potential and their initial steps on the path to godhood. Thus, as a race, rakshasas deny the worship of deities, although they welcome alliances with the servants of such peerlessly potent beings when it serves their purposes.[2]

Standing above all others of their kind are the rakshasa immortals, beings of such perfect, fathomless cruelty that they have transcended the cycle of reincarnation and become truly immortal. Rakshasa immortals are practically gods themselves, standing on equal footing with other demigods like archdevils and empyreal lords. Of all the immortals, Ravana is the oldest and most potent.[2]

All types of rakshasas (save the debased raktavarnas) are capable of potent spellcasting. They possess other supernatural powers as well, including the abilities to read minds and shapeshift into the form of mortal humanoids.[3] The skin of a rakshasa is remarkably resistant to physical damage and can ignore or greatly reduce the effectiveness of most weapons. Holy weapons capable of piercing this skin, however, can reach a rakshasa's vitals and do significant harm. As a result, in lands where their kind are well known, rakshasas take great pains to disguise themselves with magic when they are among enemies.[2]

The Cradle region of the Impossible Kingdoms of Vudra hosts the coastal city of Vaktai, which is controlled by rakshasas.[9] There are also many rakshasas living in the Vudran trading port of Sihadrimon; these rakshasas tend to focus their schemes more on the lands to the west of the Betul Sea (rather than Vudra itself).[10]

Paizo published a major article on rakshasas in Escape from Old Korvosa.