The serpentfolk[1], or sekmin, are an ancient warm-blooded race of snake-headed reptilian humanoids who once controlled a vast empire in the time before the Age of Darkness. Their empire was defeated by the Azlanti, but the serpentfolk evaded total extermination by retreating into the Darklands. Most contemporary serpentfolk are bestial creatures prowling the underground ruins of their ancient cities, and do not possess the cunning, intelligence and magic of their ancestors; these are dubbed as aapoph (meaning chaos made flesh), or commonly degenerate serpentfolk. However, a few true serpentfolk remain (now known as zyss, or commonly purecaste or advanced serpentfolk).[2][3] These highly intelligent specimens lay plans for their people's return to arcane supremacy, and the triumph of their rejuvenated civilization.[4]

Serpentfolk are sinuous humanoid creatures with the heads and tails of snakes and wickedly taloned hands and feet. Their bodies are covered in fine, elastic, tough and colourful serpentine scales. The average purecaste serpentfolk stands between five and seven feet tall and weighs from 100 to 140 pounds. Serpentfolk can command their bodies to a great degree, speak languages which would seem unpronounceable by their mouth, and easily adopt complex accents. Aapoph serpentfolk are muscular and hunched, standing four to six feet tall and weighing between 180 to 220 pounds, and sometimes having extra limbs, heads, and tails. All serpentfolk have lightweight but hardy bones, keen senses, immunity to poison, and are not sensitive to light unlike their drow or duergar neighbours. Their jaws are elastic to the point that most adult serpentfolk can instantly swallow a monkey.[4][5] 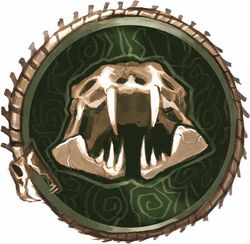 The serpentfolk are among the oldest of all sentient creatures native to Golarion. In the Age of Serpents before Earthfall, the serpentfolk empire of Sekamina spanned across continents, onto neighboring planetoids, and even into the Great Beyond.[5] They are said to have ruled portions of the now-destroyed continent of Azlant, as well as most of northern Garund, and parts of Avistan. Serpentfolk subjugated any "lesser" race they encountered, and serpentfolk ruins depict cave-dwelling humans used as cattle or beasts of burden; it is unknown how many races the serpentfolk exterminated for pure pleasure.[6] Most monuments to their greatness have crumbled away in the past 10,000 years. Only their unusually smooth obelisks, built by their many slave races, can still be found from northern Avistan to southern-most Sarusan. It is unknown how long Golarion was dominated by the serpentfolk, but even the most conservative estimations put the length of their empire in millennia.[5]

The serpentfolk went into decline during an ice age that saw their population drop, many of their holdings abandoned, and the Azlanti rising. As Azlanti power grew, the humans found themselves increasingly at odds with the fading serpentfolk empire; this often led to war.[5] The First Linnorm, the mighty Fafnheir, claims to have allied with the serpentfolk during these ancient wars.[7] The serpentfolk civilization was eventually destroyed in a war with the growing Azlanti empire. In a final battle, the serpent god Ydersius was decapitated by Savith, an Azlanti hero; the serpentfolk continued to resist the ascendant Azlanti, but the war was clearly lost, and they eventually abandoned their surface holdings to retreat to the Darklands.[5][8] The destruction of Azlant caused by Earthfall saved the remaining serpentfolk from complete elimination. The leaders decided to enter a state of magical hibernation, waiting for a day when they could retake their lost empire. They seem only now to be beginning to awaken.[9]

Most serpentfolk cities on the surface have crumbled away, either having been sacked by the Azlanti, destroyed by Earthfall, or taken by humans or monsters. Some underground have retained elements of their magically enhanced architecture.[4] 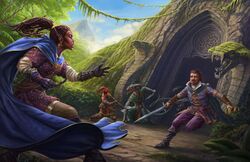 Serpentfolk defend a temple from Pathfinders.

Even though the middle part of the Darklands retains the name of the serpentfolk empire of old, Sekamina itself retains very little of the serpentfolk's legacy.[3] The serpentfolk themselves now only dwell in a few cities in the most remote corners, and most have degenerated into unintelligent barbarians over the centuries. The zyss serpentfolk who have retained the intelligence and magical aptitude of their ancestors reside near the old capital of Sverenagati, numbering less than a thousand.[4] Aapoph serpentfolk have lost their magical abilities and facility with magic items, but are stronger, more venomous, and physically tougher.[4] A few serpentfolk settlements remain on the surface, most of them in humid, remote jungles, islands, or caverns close to the surface.[3] One such settlement is located on Andobar Island at the south-eastern tip of Vudra, whose residents have recently begun constructing ominous ziggurats across the island on the orders of an unknown being whom they worship.[10] In Vudra, serpentfolk can also be found dwelling beneath the near-impenetrable canopy of the Crying Jungle.[11]

Whether a serpentfolk child is born as zyss or aapoph is determined randomly, no matter the caste of the parents. Female serpentfolk carry their broods for almost a full decade and give birth to up to a dozen young at a time, but the purecaste birth rate is low. Serpentfolk take 50 years to mature, rarely procreate more than twice in their life, and live up to 500 years.[5][12] At least one individual in a serpentfolk colony is responsible for sorting zyss and aapoph children by identifying the earliest signs of intelligence.[3]

Serpentfolk are primarily carnivorous, with 80% of their diet being meat, supplemented by Darklands fruits. Each usually eats once per month, gorging on 80 to 100 pounds of food, then digesting for 24 to 48 hours; if food is plentiful, they can eat every four to five days. Serpentfolk can survive for four months without eating, and usually only procreate after gorging themselves.[5]

During their war with the Azlanti, the serpentfolk developed a technique, which involves a zyss serpentfolk entering a specifically prepared incubation tank to irreversibly take the form of a human, so they could infiltrate human society and further the serpentfolk's schemes. Despite their outward appearance, these 'reborn' serpentfolk still have the internal organs of a serpentfolk and can only breed with other serpentfolk, not with humans.[13]

Some Azlanti accounts speak of a highest serpentfolk caste, who are geniuses even by purecaste standards and gifted with terrible quickness, toughness, and magic capable of poisoning the very earth. They were never depicted but heavily suggested in serpentfolk art. It is unknown whether they existed at all, were driven extinct when Ydersius was beheaded, or are simply sleeping beneath the deepest serpentfolk cities.[5] 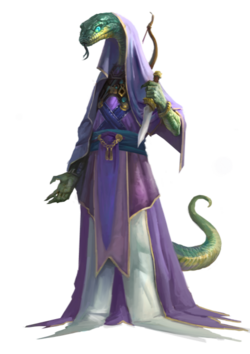 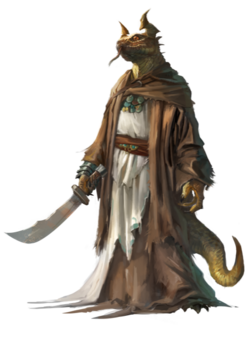 Serpentfolk culture is divided between the degenerate barbarians that make up the majority of the population, and the few individuals who have only recently begun to wake up from their magical sleep with their intellects and powers still intact. The classical serpentfolk culture was a magocracy that spanned nations who used their powers of domination and disguise to infiltrate and rule.[4] Despite the apparent demise of their civilization, the language of the serpentfolk, Aklo, is still spoken in isolated pockets throughout the Darklands by various groups.[14] Serpentfolk also commonly speak Necril, Undercommon, and Azlanti.[4]

Due to their long lifespan and slow breeding rate, serpentfolk extensively use mind-controlled slaves to do dangerous work like fighting or mining to ensure their numbers never drop too low.[5]

Zyss serpentfolk consider their telepathy the mark of their supremacy and view all non-telepathic creatures as slaves or food. They are solitary creatures, seeking to amass as much knowledge and capability as possible. They feel no love or attachment towards other serpentfolk, even their own mates or children: a mating pair only meets briefly before splitting again. Their slaves and animals are viewed as mere tools or playthings. Eating is done alone, except at major holidays and events. Trespassing into the home of another serpentfolk is considered enough reason for execution. None of these rules applies to aapoph, except a dim awareness that non-telepathic creatures are food.[5] Colonies with too many zyss become fractious, as factions start forming and backstabbing each other in pursuit of conflicting goals.[3]

All serpentfolk bow before the beheaded serpentine god Ydersius as their creator, though their methods of venerating him are varied and sometimes contradictory, fraught with heresies and cults of personality.[5]

Serpentfolk cities are elaborate and sprawling, described by a Pathfinder as such:

The purpose of some buildings in confirmed serpentfolk ruins is still debated. The complex, roofed mazes are speculated to be the equivalent of restaurants where serpentfolk could hunt and eat prey on the run. The great lenses, 30 to 50 feet in diameter, are believed to be communication devices that have not been replicated by modern scholars. The sealed, obsidian circles of standing stones in supposedly abandoned places are hypothesised to be portals to distant places.[5]

Degenerate serpentfolk have greater strength and tougher scales than their forebears, although both retain the ability to deliver a poisonous bite. The advanced members are almost always arcanists of some stripe, with the majority trained as wizards. They have a high resistance to spells and other forms of magic, and possess natural spell-like abilities. As they grow in power, they gain the ability to create complex illusions and to dominate others.[4]