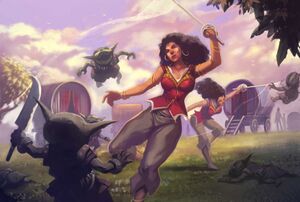 This article covers the human ethnicity. For the language spoken by the Varisian people, see Human languages of Golarion: Varisian.

Varisians (pronounced vah-RHIS-ee-ann)[1] are a primarily nomadic human ethnic group known to favor the open road over permanent settlements. Sometimes called the people of the road, their traveling caravans can be encountered throughout Golarion, but Varisians also settle in permanent communities, most notably the country of Ustalav. Varisians are often thought of as scoundrels and rogues, an unfair reputation that is based on outsiders interacting with the criminal Sczarni gangs.[2] Despite outward appearances of frivolity, the Varisian people are fiercely loyal to family and friends, and embrace a rich culture steeped in history and tradition.[3] 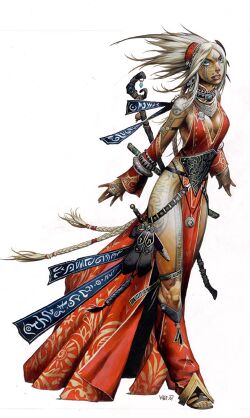 The Varisian people typically possess deep, olive-colored skin, and long hair that comes in an incredibly large range of colors from platinum to the darkest black. In fact, no one hair color is considered unusual among them. They often have large, expressive eyes that come in a variety of unusual colors such as violet or gold. Varisians tend to have lithe bodies with long limbs, and men often have trouble growing beards.[4]

They often garb themselves in brightly colored clothing; Varisians favor practical dress when completing daily tasks, but are more widely known for the elaborate, embroidered costumes they don during performances. Varisians prefer wealth in the form of gemstones and jewelry, rather than coins, and secure such valuables on their person whenever possible.[3][5] Varisians are also fond of scarves of all types, and frequently use them to provide emphasis during performances. They also commonly use scarves in more specialized capacities; the bladed scarf serves as a favorite weapon when one must appear unarmed, and a Varisian's kapenia is an intricate record of his or her family tree.[3][6][7]

Varisians often bear intricate and meaningful tattoos on their bodies. These markings range in scope from those representing notable events in an individual's life, to runes and symbols charged with magical energies, and even mysterious birth tattoos, present from the day one first enters the world.[3][6][7]

Varisian wizards often serve as keepers of their people's history and lore. Such knowledge is typically gathered from numerous sources, compiled from stories and pieces of text gathered during a clan's travels, as well as insights gleaned from occasional art and writings that remain intact within Varisia's ruins.[3]

Though now largely nomadic, the Varisian people believe that they originated in a land now devastated by some forgotten tragedy; some stories claim that the Varisian people were the rulers of this land, while others tell of an existence of servitude, but they all seem to agree that the event that brought this life to an end also heralded the beginning of their life as wanderers.[3][8]

In the 24th century AR, Varisians began migrating in large numbers and settling on the northern shores of Lake Encarthan. There they founded the nation of Ustalav in 2361 AR and ruled the land for nearly a millennia until it was overthrown by the Whispering Tyrant in 3206 AR.[9]

Varisians can be found traveling throughout Avistan, but are most prevalent in their ancient homeland of Varisia, in their adopted homeland of Ustalav, and in the human-dominated lands west of Lake Encarthan (i.e. Lastwall, and Nirmathas).[3] They can also be found in larger numbers in the Lands of the Linnorm Kings, shadowy Nidal, and the wild lands of Numeria.[4] 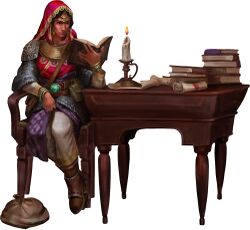 A Varisian Pathfinder at her studies.

Culture of the Open Road

Varisians are known as a nomadic culture who rarely settle down for any length of time, and consider all of Golarion to be their home. Despite this preconception, just as many live a sedentary lifestyle in numerous settlements across Avistan, most notably the nation of Ustalav, which was founded by Varisian immigrants. Those who continue their nomadic lifestyle generally traverse Avistan in family groups or clans, either on foot or in their well-known brightly-colored wagons.[3][4]

Varisians often encounter prejudice when dealing with outsiders, as they are seen as itinerant thieves and unethical swindlers who only stay in one location long enough to steal whatever they can. This preconception is largely based on people's interaction with the Sczarni, the Varisian criminal gangs. Many Varisian bands contain members of the Sczarni, but they can most often be found among the settled members of their people. Most non-Varisians feel that they should therefore be avoided and carefully watched from a safe distance.[4] Korvosans will derogatorily label Varisians moths.[10] 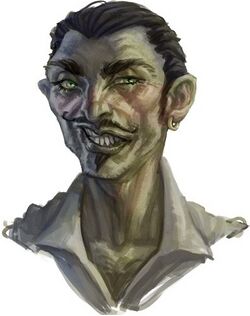 Guaril Karela, a member of the Sczarni.

The Sczarni are the criminal gangs that sometimes accompany the caravans, but are most commonly found in cities with significant Varisian populations.[4]

The Varisian people have existed as a self-identified group for thousands of years, and have built up a massive trove of tales and customs that bind them together. These traits can be found in most Varisians, no matter where in the Inner Sea region they are found.

The language of the Varisian people is also known as Varisan, and is known for its subtle nuances and double-meanings. Most Varisians also speak Taldane, the Common tongue.[4]

Varisians generally have both a given and family name. They prefer intricate, multi-syllable names beginning and ending in vowels, or beginning with the letter "z". Common male first names include Ionacu, Eugeni, and Zandu. Common female first names are Esmerelda, Zeldana, and Alika.[3] Names are often repeated through generations of the same family. Fake names may be used with strangers to avoid unwanted reputations.[2]

Varisians pay homage to a wide variety of deities, but are most commonly associated with Desna, the goddess of travel. Depending on their outlook and needs, they frequently also worship Abadar, Calistria, Cayden Cailean, Erastil, Gozreh, Norgorber, Sarenrae, Shelyn, or Urgathoa.[4]

Body adornment is common among Varisians, and many carry intricate tattoos as well. Most are chosen for sentimental or artistic reasons, but most often represent actual physical objects.[11]

Occasionally, Varisian children are born with unusual, often elaborate and colorful birthmarks known as birth tattoos. These can represent physical objects such as a sword or a unicorn, but can also be unknown runic letters or the outlines of a map. While these birthmarks appear small and undefined at birth, they change and become more clear as the child ages and reach their full size and detail with adulthood. No definitive explanation for these birthmarks has yet been offered.[4] 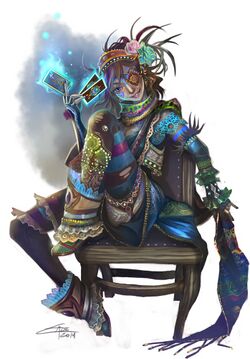 A Varisian harrower wears a variety of colors.

Dress and the power of colors

Varisians claim that certain colors enhance certain physical and mental attributes, and will vary their dress according to their needs. Pink is associated with love, kindness, and courage, while red is the color of lust, long life, and inner strength. Orange is most commonly linked with happiness and ingenuity, and adventuring Varisians will often wear a splash of orange to help assure success in their endeavours. Green is said to give wisdom and strengthen self-control, while turquoise enhances physical strength and nonverbal communication, and is therefore often worn by dancers. The color blue is associated with health, youth, and beauty, while violet grants intuition and invites divine inspiration, making it a frequent choice for fortune-tellers.[4]

A kapenia is a family scarf, an intricate and colorful cloth that traces an individual's lineage through both the mother and father, and goes back as far as the family's knowledge stretches. Each is quite heavy and its complex loops and whorls are largely undecipherable to outsiders.[4] They are prized possessions among the Varisian people, and only donned during special occasions. Kapenias are received when a young Varisian attains adulthood, and many individuals chose to be buried with their scarf. Alternatively, kapenias are sometimes bequeathed to loved ones upon the owner's death or, even more rarely, to someone outside the owner's clan.[8]

Many stories tell of a mythical savior of the Varisian people known now only by his nickname: Vyush'baro, the Cunning Wolf. In a time known as the Golden Age, it is told that Varisians were slaves to a nation of devils for thousands of years. Vyush'baro is said to have drafted a masterful document which tricked the devils into freeing the Varisians. These devils hunted the Varisians after their exodus for countless generations, destroying them wherever they were found, but were never able to bring them back under their control. Some believe Vyush'baro to have been an angel or a servant of Desna, who will return one day to lead the Varisian people to a promised land.[8]