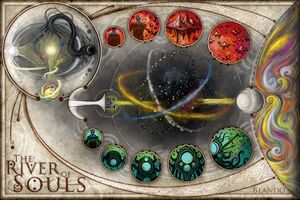 A map of the River of Souls that depicts much of the Great Beyond.

The Great Beyond is a term that encompasses all the planes of existence that make up the known multiverse. These realities beyond our reality are the domains of the gods, and play home to non-godly powers fit for worship, planar dragons, and entirely alien races.[1]

There are nineteen major planes that comprise the Great Beyond, modeled as two spheres: the Inner Sphere and the Outer Sphere. Connecting the two spheres is the Astral Plane. The spaces between the primary nineteen planes contain countless demiplanes. Despite the names implying a spherical layout, the planes exist on dimensions incomprehensible to mortals, thus these terms are used to represent the planes in two or three dimensions.[2]

The Inner Sphere is the center of the Great Beyond, sitting at the hub of creation surrounded by the Astral Plane. It is composed of the immensely huge, yet finite layers of the Elemental Planes, which surround the Material and Shadow Planes, which are in turn separated by the Ethereal. At the metaphysical center of these sit the dualistic Positive and Negative Energy Planes.[3]

While the Inner Sphere contains the elemental planes, the Outer Sphere contains nine planes, each with a strong link to a particular philosophy and alignment.[5] These are the dwelling places of Golarion's gods,[6] along with the transformed souls of mortal beings.[7]

Demiplanes and other dimensions

The multiverse is hardly a neatly-organized system, and innumerable planes and demiplanes exist outside the schema of the Inner and Outer spheres.

The mortals of Golarion have several philosophies that attempt to describe the metaphysical relationships of the planes to each other. The most prominent is known as the arcane tradition, also known as the orthodox scheme, which envisions the planes as nesting spheres of realities with the Inner Sphere at the center and Outer Sphere as the infinite exterior. In this model, the Positive and Negative Energy Planes govern the powers of creation and destruction in opposition to one another.[8]

An alternative philosophy, known as the esoteric tradition or ancient wisdom, suggests that the Positive and Negative Energy Planes are instead complementary to each other, serving as the source and destination of all creation and forming a cycle that is temporally and dimensionally infinite. All forms of life in this cycle are part of the monad, a transcendental oneness that unites all souls into a single spiritual existence, with aeons existing closest to the source of creation and mortal souls existing further away. This tradition minimizes the role of the Outer Sphere as well as the Elemental and Transitive planes.[8]

Researchers of planar metaphysics also suggest that the multiverse is itself one of many, and point to the indeterminable depths of planar rifts in the Abyss that might extend beyond the Outer Sphere into an undefined space untouched and uncontrolled by any deity and exempt from the laws of dimensionality.[9] Dou-Bral traversed the undefined space beyond the Great Beyond long ago and returned as Zon-Kuthon;[10] it is unclear whether this space is one in the same with the Dark Tapestry.[11]