The efreet (eh-FREET[1]; singular is efreeti) are a race of powerful and cruel genies that hail from the Elemental Plane of Fire. Noble efreet are called maliks.[2] 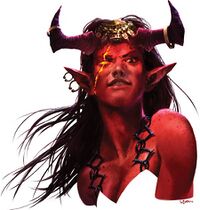 Efreet appear like crimson-skinned humans wreathed in flames with billowing black smoke seeming to leak from their very flesh. Efreet tower over normal humans at twice their height, most standing at least twelve feet tall. Further adding to the efreet's positively fiendish appearance, they have a set of horns growing out of their foreheads. These horns vary in size from efreeti to efreeti, some possessing mere nubs while others sport horns the size of a stag's. Thanks to their huge size, efreet generally weigh around two thousand pounds each.[3]

Efreet dwell only on the Plane of Fire, though their world-spanning machinations mean they can be found far beyond their traditional home. The efreet's plane-travelling schemes are only aided by their ability to shift between the planes practically at will. Efreet are the only one of the genie races that are inherently evil, and they are willing to enslave any creatures that they can overpower; they accept other species to a very limited degree and only for the practical purpose of profit.[3][4]

Efreet fail to get along well with any of the other types of genie: they positively despise the carefree djinn, hate the marids (who embody the opposing element of water), and find the jann pathetically frail. The only type of genie the efreet can actually tolerate is the shaitan, who embody elemental earth, but even then their similar nature tends to make them compete rather than cooperate. Efreet consider themselves superior to the fire mephit monarchy, the Matriarch of Holy Sublimation, as well as all geniekin and humanoids, except those few ifrits who have proven themselves.[3][4]

Efreet are the rulers of the Dominion of Flame, the most powerful empire on the Plane of Fire, whose cosmopolitan cities spread their racism, cruelty, and deviousness to nearly every corner of the plane. Their capital, the City of Brass, is one of the greatest cities in the entire Great Beyond. The Dominion of Flame maintains a tense peace with the shaitans of the Plane of Earth and sometimes work with them, except the City of Brass, which remains in a state of open war with the shaitan Opaline Vault. For this reason, oreads often receive unwelcome scrutiny within efreeti cities.[4][5][2]

Among geniekind, efreet have traditionally had the closest relationship to the Material Plane. They often appear as wish-granters and cruel slavers, and are capable of producing ifrit offspring with humans.[6]