Oreads are genie-kin descended from the union of mortal humanoids and creatures of elemental earth, most often shaitans.[1] 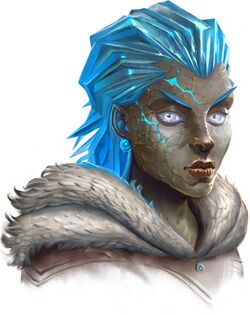 A portrait of an oread.

Oreads are stout, with stony hair and skin of earthy colours. A few show their elemental heritage even more explicitly, with shining skin, rocky outcroppings, glowing eyes, or crystalline hair but, despite this, oreads are still creatures of flesh and blood. They prefer practical clothing and simple adornments to complex jewellery.[1][2]

Oread clerics tend to worship one of the Elemental lords of Earth (Ayrzul or the still-imprisoned Sairazul) or the dwarven god Torag, or follow the path of the Green Faith. Druid and ranger oreads are common, with most druid oreads following the stone order.[3]

Most oreads are children of unions between humans and shaitans, or more rarely earth mephits or xorns. They can also come into being when their parents mingle with elemental earth energies through various ways.[2][4] 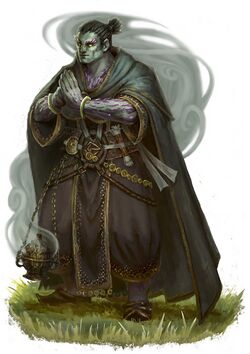 Oreads usually grow up among humans and are raised according to human customs. They want to live life at their own pace and find it hard to adapt to the bustles of urban life, preferring to live as hermits and study on mountain peaks or hidden caves. Those few city-dwelling oreads usually have little difficulty finding a job: some take advantage of their size and strength to work as guards or mercenaries, others become merchants or farmers, and yet others prefer the tranquillity of libraries and academies, becoming bookkeepers or scholars.[1][2]

Though they possess a racial affinity for the earth, oreads do not like deserts, for their tendencies toward stability and routine make them keenly feel the shifting of the dunes.[5]

Oreads are the most common immigrants from the Material Plane to the Plane of Earth, where they usually live scattered in small communities or among other races in large cities. They mix freely with the Plane of Earth's native creatures, but never feel truly at home. Some work as diplomats between shaitans and xorns or xiomorns, but this is a dangerous job and many have found themselves accidentally insulting their hosts.[6]

On the Plane of Fire, oreads often receive unwelcome scrutiny, due to the conflict between the native efreet and their shaitan progenitors.[7]

Oreads are generally calm and contemplative, and their rage is difficult to rouse but terrible. While protective of their friends, most do not have concern for the world's good as a whole. Most oreads are conservative and rarely approve of disruptions to their daily life.[1]

Despite their seclusion, middle-aged oreads usually feel an irresistible pull to some far-flung location. This pilgrimage's destination varies from oread to oread, usually a place of great magic, splendour, or learning that they are somewhat familiar with. A few are drawn in a blind direction, without any indication of what they will discover at the end of their path.[8]

Oreads have much in common with dwarves, feel a sense of kinship with other half-human races, and respect the studiousness and devotion of aasimars and elves. They have few friends and no enemies among other genie-kin. They usually find gnomes too weird and halflings, tieflings, and humans too brash and excitable.[1][9]

Oread adventurers are usually youngsters who wish to see some measure of the earth's width and breadth. They need a goal to justify adventuring, and see little point in seeking peril just for its sake, but once accustomed, oreads often continue to pursue a long career as adventurers. Oreads are sometimes hired by adventuring parties as mercenaries, but they are willing to work without pay if the cause aligns with their own.[1][2]

Oreads take well to religious life and the quiet and contemplation of a monastery. Most worship Irori or Abadar, while Torag is a common deity among those who grow up among dwarves. Some venerate Imbrex, believing them to be the earth's creator, while those seeking power are attracted to the elemental lord Ayrzul.[10]

Gemsouls, or crystal oreads, look colourful, with faceted, glowing skin, pupilless eyes and crystalline hair. They usually prefer bright clothing, and some get complex, branching tattoos. Prideful and attention-seeking, they are attracted to artistic pursuits, including flashy performances and symmetric poetry, and often live in nations that appreciate beauty or allow them to make meaningful personal contributions.[11]

Ironsouls, or metal oreads, display a metallic sheen on their skin, coloured from gold and silver to copper-green and dull grey. Patient and determined, they constantly seek to improve themselves through struggle. They work best in formal environments and prefer to live in places that reflect a deliberate growth, where they undertake great projects without waver.[11]

Kelesh is home to the largest oread population on Golarion. Many have migrated to Jalmeray, attracted by the island's renowned monasteries before its contemplative atmosphere causes them to make it their permanent home. Oreads without shaitan parents have been born to dwarves, especially near Janderhoff; this is speculated to be the influence of the Crystalrock. They can also be born to parents who previously ventured into pech refuges or searched for the Crystal Womb in Orv. In Osirion, oread births have been reported to experience a spike during khamsin storms, and they often work as guides and interpreters for caravans crossing the desert.[12][13]