Ifrits are genie-kin descended from the union of mortal humanoids and creatures of elemental fire. They are known for their impulsive, hot-headed personalities, hair that flickers like fire, and red or mottled horns that sprout from their brows.[1] 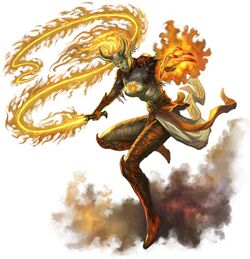 Ifrits who choose to become champions are often redeemers, especially those who enter the service of Sarenrae, and ifrit clerics tend to worship fire deities, such as Shizuru, Atreia, and Ymeri.[3]

Ifrits are most often the product of an union between a mortal and an efreeti, or less commonly an azer or salamander. Sometimes, an ifrit is born to two human parents, either as a result of a curse or magic. It is said that the rulers of the City of Brass sometimes use powerful magic to seed ifrits on the Material Plane, before contacting them to serve as agents for the Dominion of Flame, but not all such ifrits accept.[2][4]

Like their element, most (but not all) ifrits are hot-headed, consume life fully, and live for the moment. They often have difficulty adapting to cities due to their tempestuous personality and occasional pyromania, but this behaviour is rarely motivated by true malice. They fit better among tribal societies, where they can easily rise high in the hierarchy due to their instinct to explore and conquer their surroundings. Ifrits are vagabonds and loners by nature, and only have a few close friends.[2][4]

Ifrits endlessly hunger for power and glory, and consider making a name for themselves the greatest achievement, leading them to excel at their job. Ifrits usually see other individuals as tools to be controlled, get along with easily controllable races, as well as elves, whose calm, aloof demeanour tempers their impulsiveness, and tieflings, who share many physical characteristics with them. Ifrits tend to avoid sylphs, and are disliked by halflings, half-orcs, and dwarves for their imperious nature.[2][4][5]

Most ifrits lack the mindset to follow a deity or adhere to an organised religion's strictures. The few religious ifrits are usually exceptionally faithful, and often worship fire-related deities like Sarenrae or Ymeri. A small subset of ifrits worship Shyka, whom they believe truly understands the destruction and rebirth heralded by fire.[2][6]

Lavasouls, also known as magma ifrits, are fluid and intense, willing to drop old paradigms to pursue new ones, no matter their stability, invoking the cycle of creation and destruction. Most lavasouls are dark-skinned, riven with blazing lines, and possess bright hair or eyes. They also tend to acquire and discard body modifications relatively frequently.[7]

Sunsouls, or solar ifrits, are strong, optimistic, have an affinity for positive energy, and often seek to lead by example when others would falter. They are drawn both to strong leaders and passionate ethos, and to darkness where they could bring the light. Most sunsouls are fair-haired, their eyes glow brightly, and they usually never bother to hide their presence, dressing in whatever clothing they want.[8]

The most likely place to encounter an ifrit in the Inner Sea region is in the nation of Qadira, where people have been living among elemental genies for thousands of years.[9] Because of their unusual appearance and powers, ifrits are a popular commodity in the region's slave markets. The chattel auctions in the Qadiran city of Sedeq are particularly known to traffic in ifrit and other genie-kin.[10]