A graveknight is a powerful undead warrior. Analogous in some ways to a lich, a graveknight's spirit lingers in its armor, and a graveknight whose armor survives will rejuvenate in a matter of days.[1]

A graveknight appears as a monstrous suit of profane armor covering a desiccated corpse. These creatures bear the same weapons and garb as in life, but twisted by the profane reanimation.[1]

Graveknights are undead creatures that rise from fallen warlords, and wicked fighters. They are tyrants and leaders of the unliving, gaining the innate ability to bring both non-intelligent and intelligent undead under their command. They can unleash destructive blasts of energy and summon unholy mounts to bear them in combat.[1] 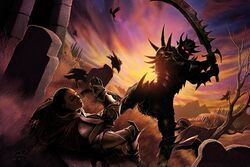 A graveknight prepares to smite Seelah.

The necromancer Geb responded to a failed raid on his nation of Geb by the Knights of Ozem, by reanimating six of the fallen knights as graveknights. He ordered them north to their former home of Lastwall, where they stole the corpse of Arazni, patron of the Knights, and returned with it to Geb.[2][3] Geb animated Arazni as a lich, and the five remaining graveknights still serve as her bodyguard.[4]

North in Avistan, a powerful stone giant graveknight of the giant god Minderhal is said to guard the Tomb of the First Battle in the Hold of Belkzen.[5]