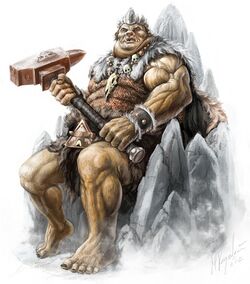 This devout hill giant sports the unholy symbol of Minderhal on warhammer and armour.

Minderhal (pronounced MIN-dehr-hawl)[1] is the smith-god of the stone giants.[2] The primary deity of evil stone giants, he represents how traditions can both enhance a culture's accomplishments and cause it to stagnate at the same time.[3]

Minderhal makes his home in Stonepeak, a chain of mountains located just outside Avernus, the first level of Hell, on the border with Axis. Although it is part of Hell, devils are not welcome in Stonepeak.[3][4]

Minderhal appears as an old, bearded, strong, wise stone giant. His worshippers prefer to sculpt his statues in soft stone to capture his strength and nuances of power. Evil tribes depict him with narrow eyes, clenched hands, and a frowning mouth. At his height of popularity, Minderhal was often portrayed as either a powerful builder or a raging colossus. He wields Weight of Tradition, a magical crafting hammer that can be thrown and which then returns to his hands.[3]

Minderhal respects Asmodeus, due to the shared border of their divine realms and Asmodeus' experience and power. While he welcomes the Ancestral Spirits into his realm out of tradition, he is secretly jealous of them since many giants have abandoned his worship in favour of theirs. Minderhal is coolly cordial with Fandarra: his unholy text refers amiably to her and contains prayers to both, and they have never argued since the Age of Legend.[5][6]

Due to their shared hunting tradition, Minderhal is friendly toward Erastil, who in turn treats him as an embarrassing black sheep. In recent years, Minderhal has been increasingly challenged by the young Urazra as the primary god of evil stone giants. He advises his followers to rely on traditions and crafting against Urazra, instead of direct aggression.[6][3]

Against other gods, Minderhal prefers avoidance to confrontation, which he considers to be diminishing even as he knows that his influence outside of giant tribes is relatively very limited.[5]

During the Age of Legend, Minderhal encouraged the stone giants to accept Thassilonian slavery in exchange for political and magical power. Their power and stoneworking skill earned the common people's admiration and spread Minderhal's faith to them. However, many stone giants resented his followers for their willingness to sacrifice them to curry favour with the runelords. When Thassilon fell, Minderhal's faith began to decline.[7][3]

There are only a few modern worshipers of Minderhal. Most stone giants, having long memories and remembering what Minderhal did to them in Thassilon, scorn him and have turned to worshipping the Ancestral Spirits, except for a few evil tribes dwelling in the mountains of western Avistan, like the Storval Plateau region of Varisia. Their sacrifices are but a trifle compared to the former glories at the height of Thassilon.[8][3]

Aside from giantkind, Minderhal also claims many of the Kellid inhabitants of the northern reaches of the Realm of the Mammoth Lords, who hold giants in extremely high esteem.[9]

Most of Minderhal's faithful focus on and try to master one aspect of his portfolio. They strictly cling to the traditions that kept their ancestors strong and reject new ways.[10]

Minderhal's unholy text is the One Hundred Sacred Stones. Each chapter is written on one stone of the fitting size, colour, and shape. Some chapters require stones found in water, underground, or burnt for a week in a fire. The text is also preserved in music, in case a tribe has to leave the stones behind.[6]

Paizo published a major article about Minderhal in Forge of the Giant God.