The historical nation of Lastwall was founded in the 39th century AR with a dual purpose. The first was to keep the Whispering Tyrant and his minions, who had been imprisoned in the former capital of Gallowspire at the end of the Shining Crusade, from ever escaping and threatening Golarion again. The second was to hold back back the violent and expansionist orcs of the Hold of Belkzen who had previously served Tar-Baphon. For nearly 900 years, Lastwall's government and people followed these mandates closely and destroyed any threat that emerged from across its northern borders, while keeping a close eye on the prison of the lich.[1] In 4719 AR, however, Tar-Baphon was able to free himself, and obliterated Lastwall's capital of Vigil and conquered the rest of Lastwall, transforming it into a haunted wasteland known as the Gravelands.[2]

Lastwall was a relatively young nation and existed for about 900 years. It was founded in 3828 AR as a province of the Empire of Taldor after the 74-year-long Shining Crusade against the Whispering Tyrant finally drew to a close.[1]

The wizard-king Tar-Baphon rose as the lich known as the Whispering Tyrant in 3203 AR, and began to gather human, orc, and undead troops under his command.[3] He spent the next five centuries expanding his power and conquered much of central Avistan.[4] Eventually, the Empire of Taldor, then near the height of its power, allied with the dwarves of Kraggodan and the Knights of Ozem to bring his reign of terror to an end and launched the Shining Crusade. They spent the next 26 years fighting a bitter battle of attrition from their beachhead at the Ustalavic town of Vellumis, eventually reaching the lich's capital of Gallowspire in 3827 AR.[5] The crusaders defeated Tar-Baphon, but proved unable to kill him, and so imprisoned him beneath his own fortress of Gallowspire using powerful magic. As the Whispering Tyrant had already cheated death once before (he was first killed by the god Aroden himself in 896 AR) the crusaders decided to establish a permanent presence in the region in 3828 AR and named it Lastwall. From there they would guard the prison, and prevent any other undead horrors from emerging.[6][5][1][4]

Lastwall stayed true to its purpose for centuries, standing guard against not only the undead horrors that emerged from Ustalav, but also the savage orc hordes of the Hold of Belkzen. These latter foes required constant vigilance to contain,[6] and managed to push back the borders of Lastwall on three separate occasions. The first border was known as the Sunwall and was established in 3828 AR at the nation's founding. It held until the orcs took back their capital of Urgir in 4237 AR and pushed back the border south of the River Esk. This second border, known as Harchrist's Blockade, held until 4517 AR, when Lastwall's defensive line had to once again be pulled back to the Kestrel River. This final border was known as the Hordeline and was stabilized due to an influx of money and troops from Lastwall's southern border. It was not as heavily fortified as either of the previous borders, but nevertheless was able to hold back the orcs until Lastwall fell in 4719 AR.[7]

Apart from the near-constant fighting against its foundational enemies (the undead of Ustalav and the orcs of Belkzen), the history of Lastwall was relatively free of wars or external conflicts. It remained neutral, refraining from getting involved in international politicking, and attempted to remain true to its founding purpose.[citation needed] An exception occurred during the reign of the evil warlord Kazavon, who led an army from Ustalav deep into orc territory and constructed the grim castle Scarwall in 4043 AR. Overjoyed at the arrival of a potential ally, Lastwall sent diplomats with tributes and overtures of friendship. Unfortunately, Kazavon was not interested in an alliance and flayed the emissaries alive. The inevitable conflict this sparked resulted in the Battle of Screaming Tree, in addition to numerous other engagements. Unable to defeat the tyrant in open battle, the Lastwall hero Mandraivus led a team into Scarwall in 4058 AR and slew Kazavon himself, putting an end to this threat to Lastwall.[8]

The next major event in Lastwall's history was its split from its founding nation of Taldor during the Even-Tongued Conquest in 4081 AR. When Cheliax declared it was breaking with Taldor to declare independence, Lastwall too broke with Taldor. Rather than becoming a part of the Chelaxian empire, Lastwall became a fully independent nation, and declared that it needed to be free of any political infighting to allow it to keep watch over Gallowspire. Cheliax agreed, and while Taldor objected, it did not have the military clout to bring Lastwall under its control.[6][5] Even so, Taldor continued to provide vital funding and recruits to Lastwall for centuries thereafter.[9][1]

In 4719 AR, the Great Seal imprisoning the Whispering Tyrant was broken and he was released once again. Lastwall was utterly destroyed by the Tyrant's forces, and after centuries spent fighting against the undead, was consigned to an undeath of its own: it was transformed into a realm of the dead known as the Gravelands.[2] 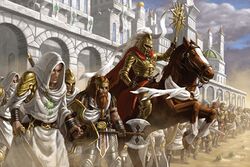 Lastwall crusaders are always ready to defend their land.

Before its fall, Lastwall was governed by a single elected leader: the Watcher-Lord. The last Watcher-Lord was Ulthun II, a young ruler only 29 years old when his nation was destroyed. Despite his youth, Ulthun II had proved himself in battle. He was an ambitious leader who wanted to secure and expand Lastwall's borders into the territory of its enemies in the Hold of Belkzen.[1] Although his position gave Ulthun II absolute power, in practice, he rarely exercised this, delegating authority and seeking good advice to help his rule.[citation needed]

Even though the absolute power wielded by the Watcher-Lord created the potential for tyranny, this was never a problem in Lastwall. The Watcher-Lord was elected by the Precentors Martial of the Crusader War College, who looked for purity of heart, clarity of mind, and someone who embodied the crusader ideal. Because of this, there never was a Watcher-Lord arrogant enough to try and assume tyrannical control over the country, as they all seemed to understand that any internal fighting for control of Lastwall would threaten the nation's primary purpose of containing the horrors of Ustalav and the orcs of Belkzen.[10][6][1]

During the last decade of Lastwall's existence, a divide began to grow between the military government in Vigil and the fort commanders on its border with the Hold of Belkzen. Out in the field, many of the soldiers believed that the central government was more interested in maintaining the status quo rather than taking the fight to the orcs. Regional fort commanders, such as Captain Thaum Gauntwood of Castle Everstand, were tempted to take matters into their own hands if they did not receive more support from Vigil, but never ended up doing so.[11]

Since the moment the nation was founded, the soldiers of Lastwall were on constant guard against the orcs of Belkzen and the various undead menaces of Virlych. The most intense military action took place on the plains of the Belkzen frontier, but the Lastwall patrols also scouted the Hungry Mountains, looking for any sign of undead activity. As these latter missions rarely uncovered any threats in the decades before the Whispering Tyrant's re-emergence, they were largely dismissed as inconsequential by the younger soldiers. The veterans, however, saw them as the backbone of Lastwall's reason for existing, and held them in much higher regard. Crusader doctrine considered the orc menace as a by-product of the Whispering Tyrant's rise, and saw that maintaining the seals that keep the lich imprisoned was every soldier's uppermost duty.[11]

The cavalry of Lastwall was legendary for its ability to turn the tide of battle. Its expertly-trained horsemen and magnificent mounts could maneuver in tight formation and, when charging, presented an unstoppable wall of hooves and steel. Sometimes, the Lastwall cavalry only needed to appear in order to trigger an enemy rout. The last such decisive battle took place in 4695 AR, when a force of 173 mounted knights rode down a force of over 2,000 infantry under the command of the orc Warlord Graukrad.[11]

Lastwall was on generally good terms with the newer nation of Nirmathas, its direct neighbor to the south, even though Nirmathi troops proved somewhat unreliable and undisciplined during joint missions. Some in Lastwall preferred the more disciplined soldiers of Nirmathas' primary antagonist, Molthune, instead, but were unwilling to provoke Nirmathas by doing so, given that their southern border was the only one they never had to constantly patrol. The government was also on congenial terms with the other nations bordering Lake Encarthan, although they kept a close eye on the tyrant of Razmiran, and the prophets of the so-called "Living God". Relations with Kyonin were cool, as the elves refused to aid Lastwall in the defeat and containment of the Whispering Tyrant.[11]

Lastwall was a nation marked by both impressive geographical features and regions of danger. It was located on the western shores of Lake Encarthan, the largest fresh water lake in Avistan, and Lastwall's largest city, Vellumis, sat on Encarthan's banks. To its north, just across the border with Ustalav, lay the Hungry Mountains. To the south lay the Fangwood, the majority of it within neighboring Nirmathas.[12] Despite these regions of bountiful natural resources, Lastwall was bordered by two incredibly dangerous areas. To the northwest lay the lands of the Hold of Belkzen, a barren region of dusty plains filled with savage hordes of war-loving orcs. To the north, nestled in the Hungry Mountains, lay the Ustalavic province of Virlych, home to Gallowspire, the prison of Tar-Baphon, which was inhabited only by the restless dead.[6][13]

The inhabitants of Lastwall were mainly human, but were willing to accept people of any race willing to dedicate themselves to the national cause. They were largely hardy and friendly, especially towards any heroic crusaders who came to help defend their land, or assist Lastwall's government in maintaining its vigil over Gallowspire. In the last several decades, fewer of these brave individuals emigrated to Lastwall, instead heading north to Mendev to hold back the ever-encroaching horrors of the Worldwound. This lack of new recruits to Lastwall's cause was a matter of much concern amongst its government and residents. Some feared that without a new influx of blood, Lastwall would eventually fall to the orc hordes that lay across its northwestern border,[6] although this concern ultimately was unfounded.[2]