A phantom is a type of spirit often fused to a spiritualist.[1]

When a mortal creature experiences tremendous trauma, the emotional forces can remove it from the River of Souls and drag it through the Ethereal Plane toward the Negative Energy Plane and undeath.

However, if the creature's soul can resist or break free of this pull, it can return to the Material Plane as a phantom and bond with a psychic spellcaster. The fused fates of a phantom and the spellcaster result in a spiritualist, who works with the phantom in a fashion similar to that of a summoner and their eidolon.[2] However, phantoms do not tolerate summoned companions and refuse to manifest if an eidolon or shadow summoned by its spiritualist is present.[3]

Although phantoms exist between death and life, they are considered outsiders instead of undead.[4] 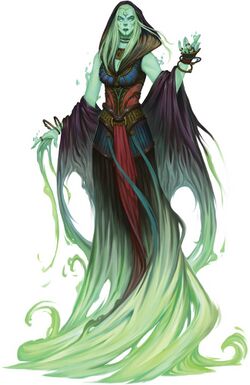 An Azlanti phantom often has a roiling green color to match its emotional drive of pride.

In many cases, a phantom has no physical appearance—it can exist solely within the spiritualist's consciousness. A spiritualist can draw a phantom out into a manifestation, which can take either incorporeal or ectoplasmic forms and change between those forms within seconds.

An incorporeal phantom, like many ghosts, can pass through physical objects and likewise cannot be harmed by most mundane physical weapons, but also might be incapable of interacting with the material world. An ectoplasmic phantom is composed of ectoplasm, an otherworldly physical material that can exist on the Material Plane and interact with the material world, but is also vulnerable in the same fashions as most other physical materials.[1]

A phantom's appearance is often influenced by its origin and mortal form. Phantoms with certain unique traits reflect this, such as Thassilonian phantoms having colors or sounds associated with an affiliated sin.[5] 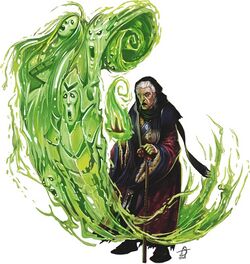 Estra creates a wall of ectoplasm using her phantom, Honaire.

Phantoms retain some of their mortal memories, as well as a degree of free will in their motivations for continuing to exist. However, their deep links to powerful emotional forces cause many of their actions to be driven by those forces rather than rational thought.

The spiritualist provides rational grounding to the phantom. A successful spiritualist's strong bond can prevent a phantom's dangerous impulses from taking control and guide it in mutually beneficial ways.[2]

Practiced spiritualists can use their phantoms in many practical ways. They might be capable of sharing senses with the spiritualist, sensing the presence of undead creatures and calming spirits' emotions, physically shielding the spiritualist and her allies or attacking their foes, and peering through invisibility to see hidden objects.[6]

A phantom's manifestation is vulnerable to spells that dismiss or banish summoned creatures and spirits. However, while residing in a spiritualist's consciousness, her psychic powers protect the phantom from these effects.

If their spiritualist falls asleep or is otherwise rendered unconscious, a phantom cannot maintain its physical manifestation. If a phantom's spiritualist is killed, the phantom returns to the Ethereal Plane and cannot return unless its spiritualist is returned to life, and then not until a day after that occurs.[3]

A phantom's manifestation retreats to the spiritualist's consciousness when defeated unless it is so greatly harmed that the damage done to the phantom banishes it directly to the Ethereal Plane. Even in those cases, a spiritualist can draw the phantom back to the Material Plane with some effort.

Phantoms are incapable of healing on their own, and can regain their material integrity only through healing magic or careful, mundane tending to their ectoplasmic manifestation.[1] 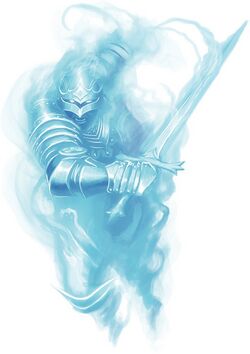 In addition to being in the presence of spiritualists, phantoms can also be present anywhere traumatic, emotional lives or deaths occurred, or where powerful psychic presences exist, including the Sodden Lands,[7] Geb, Ustalav, the Shackles,[8] and sites strongly associated with ancient Thassilon.[9] Of note, some adventurers seeking treasure in the Sodden Lands return as spiritualists fused with the restless souls of the dead from Lirgen and Yamasa.[7]

Phantoms are known to alarm worshipers of Pharasma, who distrust those who restrain souls from reaching her judgment, as well as people in rural areas who confuse bound phantoms with undead. Among scholars, phantoms are often confused with eidolons. In Osirion and Thuvia, the plights of phantoms are pitied for the circumstances that led to their creation.[8]

Rather than strictly focus on an emotional response, phantoms from the long-ruined ancient empire of Thassilon are often associated with a specific sin, such as greed or wrath. These associations extend to the color and traits of the phantom's manifestation, its aptitudes and abilities, and the bond it shares with its spiritualist. Some scholars believe these phantoms are linked or bound to runewells.[10]

In rare cases, a phantom might be an especially remorseful soul that was returned to the Material Plane by Pharasma's judgment. These souls have more fragile memories of their prior mortal lives and rely on their bound spiritualist, who in this case is known as a fated guide, to help them discover the reasons why they returned and how they could find lasting peace.[8]

Paizo introduced phantoms in Occult Adventures, and includes articles on them in Occult Realms and Occult Origins.