First created by the Runelord Alaznist during the ancient Thassilonian empire, sinspawn[1] are tortured mockeries of humans. Twisted by vile rune magic, they are consumed by an overwhelming wrath toward all others.[2][3]

Resembling deformed humanoids, the sinspawn are emaciated horrors with unnaturally long arms and legs. Their hands each have two talon-tipped fingers and a thumb, and their legs bend like those of a dog. Veins bulge all over their bodies to form dark blue or red patterns that look like twisted runes. Their flesh is pale and hairless.

A sinspawn's head is curiously elongated and has only a pair of slits for a nose; its eyes are bulging and red with no visible eyebrows. Its lower jaw splits in half at the chin into pedipalps that end in tiny three-fingered hands that writhe about, eager to feed delicious morsels into an open gullet with a lolling tongue.[4]

Created by Alaznist as shock troops, the sinspawn are born with the knowledge to wear armor and use most weapons. In addition, they are naturally stealthy creatures.[2]

Being highly attuned to anger, sinspawn can somehow sense those who are extraordinarily wrathful, and can track them like a dog following a scent.[2]

A creature bitten by a sinspawn is overcome with feelings of anger and rage towards others. Those who succumb are so overwhelmed by these feelings that they have a hard time concentrating on much else. If they are bitten a second time, these feelings can become crippling.[2]

Sinspawn were originally created by the runelord of wrath Alaznist. A student of fleshwarping, taught by her ally Yamasoth, Alaznist combined it with alchemy and alghollthu secrets on human test subjects, then sacrificed them to her runewell, creating the first sinspawn in -5782 AR. She quickly discovered that feeding the fresh blood of wrathful humanoids to the runewell allowed her to mass produce armies of sinspawn, and invested them with free will to develop their own power.[5]

The other runelords set out to create their own sinspawn after Alaznist deployed them against her arch-enemy Karzoug, either by paying her directly, stealing her notes, or reverse-engineering captured sinspawn. Eventually, all runelords developed their own sinspawn, and if it were not for Earthfall, armies of sinspawn might have very well overrun Thassilon. Since the runelords abandoned their creations to retreat from Earthfall, the sinspawn have remained in hiding, congregating near newly-awakened runewells, such as the one in the Catacombs of Wrath beneath the town of Sandpoint.[6][5] 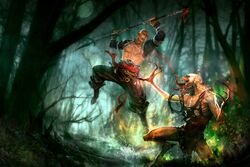 Sinspawn can only be created with the use of an ancient Thassilonian device known as a runewell. When a person stained by the runewell's associated sin dies in the close vicinity of a runewell, its soul is drawn to the artifact, which stores an imprint of the soul as it journeys to the afterlife. The stain of sin can be enhanced by magic, a sinspawn's bite, curses or corruptions. When enough soul energy has been collected (usually from at least four soul imprints) and an appropriate sacrifice is made (generally in the form of blood), the runewell can produce an adult sinspawn immediately available for action.[7][5]

Sinspawn are unable to procreate, but it understands its connection to the runewell and can track down souls associated with its sin. Sinspawn instinctively understand how runewells create them, so when possible, they drag their prey to their lair and infect them with their bite before killing them, accelerating the birth of more sinspawn.[5]

Although they like the taste of humanoid meat, if they stay within a mile of a runewell sinspawn need no food or water and do not age; many currently living sinspawn have survived from the Age of Legend, but most live violent lives and are killed by intruders or other sinspawn. If their runewell goes dormant, sinspawn usually enter hibernation, stirring only when wounded or when the runewell is reactivated. If drawn away from their runewell, sinspawn usually die after a human lifetime.[5]

In the ancient Thassilonian realm of Bakrakhan, Runelord Alaznist kept whole villages of sinspawn at her beck and call. Due to their inherently violent natures, however, they required nearly constant monitoring. Other runelords similarly had to appease their sinspawn with offerings appropriate for their sin. They were trained as elite troops in fortified barracks near their runewells, hidden in remote areas.[5]

In the modern era, sinspawn live in small, isolated cults near their runewells. Recognising the importance of their runewell, sinspawn organise hunts to keep them fed, and are willing to defend them to the death despite being not particularly brave. On the other hand, sinspawn also know that their siblings are also rivals, and collect equipment that give them an advantage. Due to their sinful, violent natures, sinspawn groups rarely exceed eight members, except when a leader is available and capable of directing their violence.[5]

Sinspawn view most humanoids as inferior, and as a result tend to underestimate humanoid adventurers. The exception are giants, who often commanded them back when Thassilon still existed, so most sinspawn instinctively obey giants. They sometimes ally with other monsters, but usually end up squabbling with them over loot.[5]

Sinspawn are usually very religious and venerate Rovagug, Lamashtu, an ancient Thassilonian deity, demon lords associated with their sin, or even the runewell that create them.[5]

The original version of sinspawn created by Alaznist, also called wrathspawn after her associated sin, are the most numerous sinspawn type. Other runelords experimented with sinspawn, imbuing their creations with their associated sin as well:

Alaznist also developed aquatic wrathspawn with gills and webbed hands and feet; Belimarius and Sorshen followed suit, creating aquatic envyspawn and aquatic lustspawn, while other types of aquatic sinspawn are very rare. Xanderghul believed that his sinspawn should be able to fly above their enemies, but he did not have time to create many aerial pridespawn before Earthfall; they now lurk in the ruins in the mountains of Cyrusian.[5]