This page contains spoilers for the following products: The entire Return of the Runelords Adventure Path.

Sorshen (pronounced SOHR-shehn)[3] was the only runelord of lust and ruler of the Thassilonian realm of Eurythnia during Thassilon's entire lifespan.[2][4] 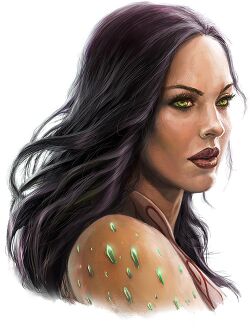 A portrait of the runelord Sorshen.

Sorshen was one of the only two runelords who ruled their domain for the entire lifespan of Thassilon, the other being Xanderghul. She accompanied Xin in his exile from Azlant and was responsible for convincing Xin to delegate the rule of Thassilon to the runelords: Sorshen was rewarded with the domain of Eurythnia and her original title of runelord of love. It was Sorshen who created the first runewells, after having discovered, studied, and reverse-engineered the Everdawn Pool. She shared this secret with the other runelords, a decision which she would later regret, before she and the six other runelords betrayed and assassinated Xin and later fell into infighting. During the final years of Thassilon, she developed the runewaking ritual to remove Zutha, but she didn't have the chance to put it to use before the end of Thassilon.[5][6][7][8]

To prepare for the incoming Earthfall and the destruction of Thassilon, Sorshen used her runewell to create the Eye of Desire, a demiplane where she could hide from the cataclysm, in secret vaults guarded by clans of loyal vampires deep beneath Xin-Eurythnia. These vaults were an elaborate puzzle designed to siphon blood from exotic creatures that would be used to slowly reawaken Sorshen once the danger had passed, but she never stirred until Karzoug's runewell was activated in 4702 AR and only awakened after Ileosa Arabasti used the Everdawn Pool to bolster her power.[5][6]

Instead of immediately returning to the world, Sorshen decided to emerge quietly and take her time to reflect. As she watches Karzoug, Krune and Zutha reemerging and getting defeated, she grew dissatisfied by the runelords' bickering and bored of carnal pleasures and idle cruelty. Realising that the world has changed, having no wish to be left behind and being further inspired by the former demon lord Nocticula's rise from the Abyss, Sorshen concluded that the tyrannical rule of Thassilon could no longer work.[1][6]

Sorshen released her cabal of vampires from her service, accepting that continuing to associate with them would only create more enemies. When she learnt that Alaznist was meddling with time, Sorshen relocated the Everdawn Pool into the Eye of Desire and created blood simulacra of herself to serve as agents and oppose Alaznist without having to put herself at risk. She seeks to rule New Thassilon peacefully without having to war with its neighbours.[1][6]

In their vanity, many of the runelords commissioned massive images of themselves to be carved into the sides of mountains. For Sorshen, a simple bust was not enough, and she instead constructed enormous full-body statues of herself and placed them throughout Eurythnia.

In -6060 AR, Sorshen commissioned the construction of the Lady's Light as a display of her power, and as a place to stay when she or her agents were spying upon Bakrakhan and Shalast.[9]

Most of her monuments were destroyed during Earthfall, and the literal feet of one of these statues can still be seen in the southern district known as the Heights in the Varisian city of Korvosa.[9][10] Only the Lady's Light still remains intact, and it is now the first thing that most sailors see when they first approach the shores of Varisia.[9]