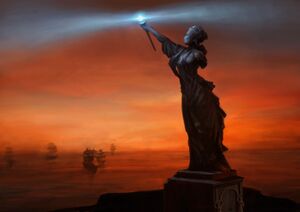 The Lady's Light is an enormous statue located on the end of a peninsula in the south-westernmost reaches of Varisia's Mushfens, approximately 50 miles from the city of Magnimar as the crow flies.[1] Almost 200 feet in height, the statue resembles a woman in flowing robes with one breast bared, holding a staff aloft.[2][3]

While its location at the edge of the ancient kingdom of Bakrakhan might suggest that the Lady's Light depicts Alaznist (the realm's female Runelord) the statue is very different from how she is normally portrayed.[4] A bright blue light shines from the staff's tip at regular intervals, often making it the first thing that ships entering Varisian waters see, and warning them away from the dangerous reefs near the statue's base. Beneath the strange statue, a mysterious door leads deeper into the ancient statue. What lies beyond the door none can say, for it has not been opened in modern times, possibly even since the fall of Thassilon itself.[2][5][6]

The statue, which is actually a building from the ancient Thassilonian realm of Eurythnia, depicts the Runelord Sorshen[6] and was built with the labor of enslaved rune and stone giants.[7]. Completed in -6060 AR, it was designed as a display of the runelord's power, and as a place to stay when she or her agents were spying upon the realms of Bakrakhan and Shalast. The chambers within housed many of Sorshen's servants, overseen by the capable succubus, Ayandamahla.[6]

The structure survived the destruction of the Thassilonian Empire due to its location and firm foundation, although most of those who survived fled due to the massive flooding. Ayandamahla, having been bound magically to the building, was not afforded this escape. She remained behind, growing increasingly frustrated by her imprisonment, until she was able to trick her daughter, the alu-demon Ashamintallu, to take her place.[6]

Even though countless sailors pass the Lady's Light on their way around the south-westernmost point of Varisia's coastline, few have actually visited the statue. This is due to the fact that by land one must trek through the dangerous and inhospitable Mushfens to reach it, filled with tribes of boggards, troglodytes and other monsters, while by sea the approach is protected by treacherous reefs.[1]