Verminous dangers that roam the hinterlands of civilisation, ankhravs[1] — also known as ankhegs[2] — are burrowing insect-like menaces that prey on livestock and the farmers who guard them.[2][1]

At first glance, an ankhrav seems to be a gigantic insect. The length of its nearly horse-sized body[1] is covered in hard chitin from its clacking mandibles to the back of its abdomen, and it sports six legs. Unlike true insects, however, an ankhrav has only one set of eyes and possesses a rudimentary intelligence similar to that of reptiles. Its oversized mandibles excrete a potent acid which it uses to dissolve its food. Larger species of ankhravs the size of elephants have been spotted in remote wilderness areas, particularly deserts, where they prey upon giant scorpions, camels, and other creatures native to that environment.[2] 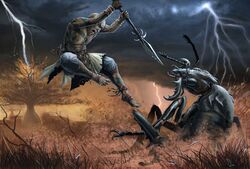 Ankhravs tend to dwell on the outskirts of civilisation where they have a steady access to food. They can only dig through soil, sand, and gravel but not solid rock, so they are never found in mountainous or other rocky terrain. Their preferred habitat seems to be rural farmland, as such places not only have loose soil, but also a large supply of livestock and farmers to feed on. Ankhravs also often dwell in deserts, with some of them growing far larger than normal ankhravs.[2]

An ankhrav is more intelligent than it looks—much smarter than normal insects—and can be trained to serve as beasts of burden, mounts, or war beasts. While smarter than insects, however, they are still less intelligent than most animals and have a nasty tendency to squirt acid when surprised or scared. As a result, ankhravs are only trained by savage races that value their fighting ability over the safety of those near them. This includes races like hobgoblins, xulgaths, and especially orcs, who are renowned for their love of violent war beasts.[2]

Ankhravs are common in the deserts of Garund, particularly northern Katapesh,[3] and are even resilient enough to dwell in the scorching Cinderlands of eastern Varisia.[4]

Ankhravs most famously live in the Skittermounds of the desolate Hold of Belkzen. Here, ankhravs create huge nests beneath the land's vast sandy mounds, and armies of the creatures battle each other for territory and scant resources.[5] The Skittermounds ankhravs' enormous nests seem to be an exception, however, as ankhravs are often solitary hunters that do not gather in such numbers.[2]

Hive mothers are an even larger breed of ankhrav, with two sharp arms resembling a mantis's.[1]

Ankhravs have been spotted on the hive moon of Nchak that orbits the gas giant Liavara. This species seems to be indistinguishable from the one found on Golarion.[6]