The boar or wild boar is a more ornery and dangerous cousin of the domesticated pig.[1] They can be found in the woodlands of much of Avistan and Garund, and are frequently hunted for their flesh, which is considered a delicacy.[2][3]

Boars can breed freely and quickly, and eat voraciously and omnivorously, making them a menace to farmers and food storage. They become more aggressive during mating season, with males growing additional flesh to protect themselves during conflicts over mates, but otherwise attack only in self-defense.[1]

Boars are often hunted with special spears that include a cross-beam that keep the impaled animal from pushing forward and goring its attacker with its powerful tusks.[2]

Boars are omnivores that will not shy away from eating anything remotely palatable. This makes them useful for disposing of garbage,[1] and boars are sometimes kept by orcs or kobolds, who use them as mounts and let them roam free in their camps, or by thieves' guilds for getting rid of organic evidence.[2][4] They are also trained to become warbeasts and guard animals.[1] 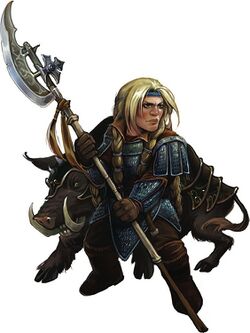 Boars and dire boars have been selected variously by cavaliers, druids, paladins, and rangers as their companion animals.[5][6] Dire boars are particularly favoured of orc cavaliers and druids.[7]

A wide variety of boar species exists across Golarion, from the warthogs[1] of the tropical plains and savannas, the Sargavan boar of the Mwangi Expanse and Sargava,[8] to the blood boar of Razmiran's Exalted Wood.[2][9] In Taldor, titanboars have been bred to be particularly challenging hunting quarry, but often become feral and cause great damage to the countryside.[10] Enormous, armor-plated steam hogs are used as war beasts by fire giant armies.[11]

Bristle boars are a species of boar resident in the lowlands of the Hold of Belkzen and are as tough as anything emerging from that land. Their defining characteristic are the nasty spines that protect their head and neck. These bristles are used as a vicious adjunct to any gore attack by the boars and deal particularly bloody wounds. Bristle boars tower above normal boars at four feet in height but are much leaner, so weigh roughly the same at about 200 lbs, and provide little meat to any hunter desperate enough to prey on them.[12] Some Belkzen residents train bristle boars to be animal companions.[13]

The dire boar or daeodon is a much larger, and much more aggressive relative of the common wild boar. While wild boars are omnivores, dire boars prefer the taste of fresh meat, and their keen senses and large, sharp tusks make them superior predators. Primarily scavengers, daeodons occasionally attack smaller, lone individuals if no easier source of food is present. Orcs sometimes use dire boars as mounts, and dire boar-mounted orc cavalry can be a truly terrifying sight. They are generally at least ten feet in length and seven feet tall at the shoulder, weighing upwards of 2,000 pounds.[1]

Faster than common boars and less aggressive, warthogs originate and are found in numbers in the Mwangi Expanse. They sport large tusks and armoured ridges on their faces—the latter often mistaken as the warts from which they are named.[14]