While many warriors strive to perfect their art, spending all of their time honing their skill at martial arms, others spend as much effort dedicating themselves to a cause. These warriors, known as cavaliers, swear themselves to a purpose, serving it above all else. Cavaliers are skilled at fighting from horseback, and are often found charging across a battlefield, with the symbol of their order trailing on a long, fluttering banner. The cavalier's true power comes from the conviction of his ideals, the oaths that he swears, and the challenges he makes.[1] 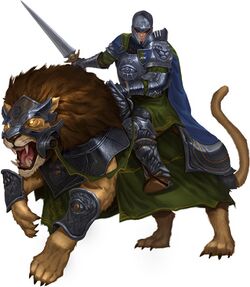 Like fighters, cavaliers journey forth from all nations in the Inner Sea region, although certain orders are more popular in particular nations (see below).[2]

All races and manner of beings might enter into the cavalier class.

Cavaliers do not follow any specific religion in general. However, they do follow orders that help to define the cavalier's role in Golarion. 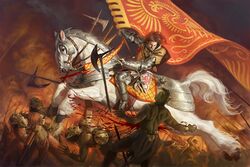 The following orders represent the most common chosen by cavaliers. Members of these orders are not necessarily bound together, but some organizations do exist that are comprised of cavaliers that all belong to one specific order.

Orders of the Beast (two separate and distinct orders)

Order of the Blossom

Order of the Cockatrice

A cavalier who belongs to this order serves only himself, working to further his own aims and increase his own prestige.[1] The order is popular in the crusader nation of Mendev, where warriors in the never-ending war against the demons of the Worldwound often lose faith in all else except themselves.[2] This order is also the most popular order amongst tiefling cavaliers.[6]

Order of the Dragon

These cavaliers believe in loyalty and friendship, and are willing to lay down their lives to protect their allies.[1]

Order of the Eel

The order of the eel was founded by locathah cavaliers who believed success and greatness are based on diplomacy. Today, other aquatic races have joined the order, as well as coastal-based cavaliers on land.[7]

Order of the Flame

Cavaliers of the order of the flame seek personal glory, high renown and legendary status regardless of the cost or risk.[8]

Order of the Green

Cavaliers of the order of the Green are powerful advocates and followers of the Green Faith and they dedicate themselves to protecting the wilderness and the natural order.[9]

Order of the Guard

Cavalier followers of the order of the guard take the role of a dedicated bodyguard of a specific person or entity.[4]

Order of the Hammer

Cavaliers of the order of the hammer consider strength to be the most important aspect of life and the strong earn the right to rule over the weak. Such cavaliers are constantly proving their greater strength against adversaries. The order's name comes from the Suit of Hammers of a Harrow deck.[10]

Order of the Hero

Order of the hero cavaliers dedicate themselves to protecting the vulnerable from large monsters by hunting them down.[11]

Order of the Land

These cavaliers believe in protecting commoners from oppression. Often ill-equipped, they are self-reliant and find a way to make do with the resources they do have. They can be found leading untrained revolutionaries against tyrants.[12]

Order of the Lion

A cavalier who belongs to this order has pledged himself to a sovereign; be it a king, queen, or even the local warlord.[1] The order is particularly popular in Taldor, Andoran, and the River Kingdoms where members serve as bodyguards or generals in royal armies.[2]

Order of the Monument

Cavaliers of the order of the monument assign themselves to protect their chosen settlement respecting and upholding the local faiths and laws. Even when abroad, such cavaliers maintain their settlement's codes and norms.[13]

Order of the Penitent

This order's cavaliers are reformed criminals who have realized the suffering they have caused. To atone for their crimes, these cavaliers pledge themselves to honorable service. They are merciful to others, assuming very few foes are beyond redemption, delivering suspected criminals for a fair trial. When forced to dispense judgment, they go to great lengths to ensure fairness.[12]

Order of the Reins

Cavaliers belonging to the order of the reins extend their care for their mount to all trained, working, and domesticated animals. This attitude makes them excellent guards for caravans in which role they are often employed.[14]

Order of the Scales

Such cavaliers hold legal integrity as the highest goal to defend.[15]

Order of the Shield

These cavaliers stand before the tide, protecting the innocent from roving marauders and hungry monsters.[1] Followers of this order are most frequently found in Andoran and particularly in Galt, where growing atrocities committed against the common people drive their mission.[2]

Order of the Staff

A cavalier who belongs to this order is dedicated to protecting spellcasters. Important magical items and locations are also guarded. These cavaliers will assist any spellcaster requesting aid, unless the requester opposes the cavalier's goals or the cavalier's duties would be adversely impacted.[12]

Order of the Star

Cavaliers who join the order of the star dedicate themselves to the protection and service of a faith and its members.[1] In the Inner Sea region, they are most commonly associated with the faiths of Abadar, Asmodeus, Gorum, Iomedae, Sarenrae, and Torag.[2]

Order of the Sword

Cavaliers who join the order of the sword dedicate their lives to the code of chivalry, living a life of honor, valor, and fairness.[1]

Order of the Waves

Cavaliers belonging to the order of the waves are predominantly found underwater investigating the mysteries found in the seas and oceans of Golarion.[16]

Order of the Whip

This order is favoured by sadists who use the teachings of the order as an excuse to bring misery to their victims. Slaver organisations will gladly recruit such cavaliers. Only evil cavaliers choose this order.[17]

The order of vengeance is for cavaliers seeking to regain their rightful homeland and to take revenge on those who dispossessed them. It is commonly linked to the church of Calistria. It is also an order taken by many cavaliers who fled the Red Revolution of Galt and fled to Gralton in the River Kingdoms.[18]