Fire giants worship Zursvaater almost exclusively, and believe that he created them by giving stone giants the gift of fire and metalworking. Zursvaater taught his children to leave their inter-tribal fighting, and instead focus their hostility on other races.[1] 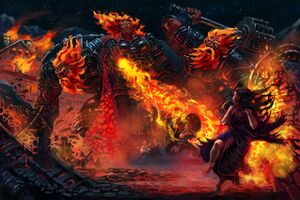 Tribes of fire giants are said to dwell in the Mindspin Mountains of northwestern Avistan. They have contact with tribes of azer and salamanders living below them in the volcanic Darklands region known as the Flume Warrens. Both races seek to ally themselves with the giants, but so far have been rebuffed, as the fire giants prefer to play the tribes off against each other for their own advantage.[2]

On the far side of the globe they inhabit the volcanic Chenlun Mountains of southern Tian Xia, where they are often ruled by powerful fire yai lords.[3]