A darvakka is created, fully formed, from an outsider (usually a fiend) cast down in the darkest depths of the Chasm to Shadow between the Shadow Plane and the Negative Energy Plane. The Chasm breaks them down utterly and refashions them as undead creatures.[3]

Made of a mixture between darkness and evil, darvakkas keep no memories of their fiendish lives and are more akin to entirely new entities than to twisted versions of the original creatures. This composition gives rise to the darvakkas' greatest weakness: an aversion to light, especially natural starlight.[4]

Embodiments of entropy and darkness, darvakkas hold an inescapable desire to turn off the lights of the Material Plane and cast all living creatures into the darkness of the Negative Energy Plane. In this way, they have more in common with outsiders than with typical undead like liches and vampires, who might still retain mortal desires.[4]

Some sages speculate that the various types of darvakkas are merely stages of life of the same creature; according to some others, they are different creatures, formed depending on the strength of the component fiend, but these scholars have no idea of the exact formula of a darvakka's creation.[4]

Darvakkas most commonly dwell in the darkest areas between the Shadow Plane and the Negative Energy Plane: places like Fallen Duromak and the shadow double of Mechitar are heavily populated with them, and they also maintain a minor presence in Shadow Absalom, ostensibly as Argrinyxia's servants. Due to their gross aversion to light, they rarely leave their home and are usually only found on other planes when summoned. On the Material Plane, they spend daylight hours hiding in dark lairs and only emerge at night.[4] 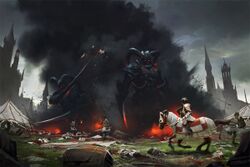 Sykevers battle against the Glorious Reclamation.

Darvakkas view most other undead as useful servitors; they do not destroy them outright but will only do so when the darvakkas achieve their goal. Because of this, they seek few allies and no friends; powerful undead that can control them like elder vampires and devourers are usually avoided by darvakkas. Darvakkas distrust each other and never view other darvakkas as equals, due to the subtle fiendish influence from their origin as fiends. Cooperation between darvakkas is rare, but the result is always catastrophic.[4]

Darvakkas sometimes serve Urgathoa's cultists, but only as long as they can control or bribe them. Due to their isolation from Abaddon and the Abyss, darvakkas rarely interact with fiends or work with mortal servants of demon lords and the Four Horsemen, and prey upon fiends as readily as upon mortals.[4]

A hypothesis postulates that the darvakkas might be guided by a supreme intelligence hidden deep in the Chasm to Shadow.[3]

Darvakkas are rare on the Material Plane, only appearing when summoned by powerful clerics or necromancers, and quickly dismissed or destroyed when their usefulness ends. The wizard-kings Tar-Baphon and Geb employed darvakkas in their armies, and their remnants can still be found, respectively, underground in the haunted land of Virlych and in the Mana Wastes. Deep between the Gebbite city of Yled, three sykevers and the Bound One, a larger darvakka of unknown type, are held in stasis. Nidal's ruling Kuthites, with the help of their patron's power, sometimes summon darvakkas. They can also be found in small numbers on the dead planet Eox, drawn there by the calamity that killed it.[4]