Ghouls have a somewhat human appearance, sharing the basic frame of the humanoid they were created from, although up close it is almost impossible to mistake a ghoul for a still-living person. Firstly, all ghouls look emaciated and hungry and despite their frequent feasting, ghouls never put on any weight, always looking wiry and under-weight. Their skin also takes on the hue of bruised, pallid flesh.[1] The facial features of the ghoul change subtly as well; the most obvious addition is the teeth which increase in both size and sharpness. The rest of the face also changes with the ears becoming larger and ending in a pointed tip, and the face becoming more elongated. Scholars have noted that these changes give ghouls a more elven appearance; some suspect that this is not a coincidence and indicates some ancient shame perpetrated in the ancient depths of elven history.[2] 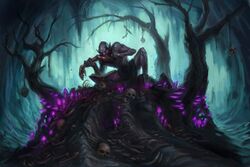 A ghoul feasts on a rotting corpse.

One of the most interesting and disturbing things about ghouls is that despite being undead, they harbour many of the needs that drive the living, though admittedly these needs are normally perverted in some sinister way. Hunger is a ghoul's primary motivator, despite being dead with stomachs that long ago stopped working. This hunger is constant, never rising or falling, and only ceasing during the actual consumption of flesh. Eating has no biological benefit and a ghoul can go for years without eating and suffer no negative consequences. While this hunger drives ghouls to always be on the look out for prey, ghouls are also intelligent creatures; they have other needs apart from hunger, needs that can be sated. The only product of a ghoul's flesh consumption seems to be that it is absorbed directly into the body to replace the ghoul's own decayed, necrotic flesh. Strangely enough, ghouls only shed this necrotic waste when there is enough food to resupply it. Though they prefer rotting bodies and often bury their victims for a while to improve their taste, ghouls will eat fresh kills if they are hungry enough.[2]

A ghoul created from a Kellid human.

The creation of a ghoul can happen in a number of ways. Strangely, only one of these involves the ghoul itself passing on its condition. The bite of a ghoul can inflict ghoul fever, as can consuming a ghoul's flesh (though few would ever do this willingly). Ghoul fever causes the victim to suffer from great hunger, yet they are unable to keep down any food and the hunger drives them to manic behaviour, eventually racking them with agonising spasms. Unless cured, the victim slowly starves to death, rising the next midnight as a ghoul, for only in the darkest hours can such a foul metamorphosis occur.[3]

While ghoul fever may be the most common method of creating ghouls, other ways also exist. necromancers know how to use the spell create undead to awaken a ravenous hunger within a corpse turning it into a ghoul.[4] A rarer, less well-understood transformation sometimes occurs when a sentient human is forced to resort to cannibalism. Whether they starve to death or die sometime after matters little, for the foul deed has stained them often causing them to rise again as ghouls.[3]

Another strange method of creation occurs only in the Darklands. The unique magical ore lazurite gives off a necromantic radiation that can cause any corpses left nearby to spontaneously rise as ghouls or ghasts. This spontaneous creation accounts for many of the non-humanoid ghouls found roaming the darkened caves and this method of creation is unusual because in some cases the newly created undead retains the knowledge and skills it possessed in life.[3]

Finally, a victim killed by the gaze of a nabasu demon can also be transformed into a ghoul under the demon's control, though these ghouls gain free will if their demonic master is slain.[5]

Ghouls are most commonly found on the outskirts of larger population centers, often in and around graveyards and sewers. This gives them access to a steady supply of food. Wherever they dwell, ghouls gather in communities, as they possess the same need for companionship, diversion, and entertainment that humans do. Ghoul warrens can be surprisingly large, encompassing miles of tunnels and only limited near the surface by the size of the graveyard they lie beneath, though some ghouls are also known to dwell in the depths of the Darklands.[6] 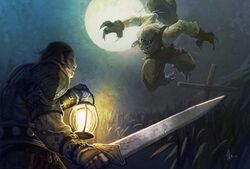 A ghoul ambushes an adventurer.

Despite their ravenous, bestial nature, ghouls are as smart as humans, if not smarter, as they are able to devote centuries to their dark studies. This intelligence allows ghouls to form large, sometimes intricate social groups. At its most basic, ghoul society consists of a small pack, often led by a more powerful ghast (see ghoul variants below),[1] while at its most advanced, ghoul society has carved for itself a metropolis in the Darklands realm of Sekamina that rivals the greatest of the human cities above.

Ghoul society seems to rise to its zenith in the depth of the Darklands, where they build towns and even the bone-white metropolis of Nemret Noktoria which serves as the capital of ghoul civilisation. In Nemret Noktoria, ghoul society goes from pack life to a sophisticated caste system.[7] Above the normal ghouls rule a cast of animal-headed ghoul priests and powerful ghuls,[8] the ghoul nobility. At the top of this hierarchy sits the ghoul lord Kortash Khain.[7]

The ghouls of the Darklands are more civilised than their surface dwelling cousins, and they take a more active role in reproduction (to most ghouls, it is just an accident when dinner escapes). A Darklands ghoul looks at most sentient creatures as either a potential ghoul or a potential meal, though the citizens of Nemret Noktoria are actually willing to trade with humans, as long as they are not too hungry. Nemret Noktoria has such a hold over the other Darkland ghouls, that they are all required to provide a tithe of rancid carrion to the city. To cope with this tithe, many ghouls now keep flesh farms of morlocks, goblins, grimlocks or rarer dwarves or humans. These are kept in docile, near-blind herds in filthy, isolated caves, where they are fattened up to morbid obesity to ensure the ghouls never have to go without meat.[7]

The mythology of the ghouls is tied in with that of their fiendish patron: the demon lord Kabriri. Accoring to myth, Kabriri was the first ghoul, though he was not always a ghoul; once he was a man. Supposedly, he was the first person to feast upon the flesh of his brother man. What caused him to do this is not recorded, but the result is that it appears Kabriri was the first man struck with ghoul fever. His stomach was wracked with pain and an intense hunger. After days of suffering Kabriri finally succumbed to the disease and died,[3] and he awoke in the Abyss, as something far from human in an endless necropolis that would be come to be known as Everglut. Almost all ghouls believe this myth and most therefore worship Kabriri as their progenitor.[9] Interestingly, some point to the elven appearance of ghouls and Kabriri himself as an indicator that Kabriri may in fact have been an elf.[2]

As has been already mentioned, ghouls are often found on the outskirts of civilized areas, and are known to exist across the surface of Golarion and in the Darklands city of Nemret Noktoria (see above). They are counted amongst the lesser nobility of the undead-dominated nation of Geb in southeastern Garund.[10] 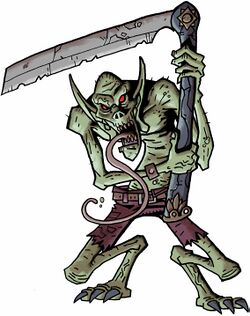 A ghoul wielding a scythe.

Ghouls have several known variants that are directly tied to ghoul-kind, the most well known is the ghast.

Ghasts are more powerful versions of ghouls, strong enough to paralyze even elves, who are normally immune to a ghoul's paralysis. Ghasts roam in packs of their own kind or lead groups of common ghouls. The stink of death and corruption surrounding these creatures is so overwhelming that it threatens to sicken any living creatures in close proximity.[1] Ghasts normally occur when a ghoul would be created from a creature more powerful than humans or elves, creatures like bugbears or troglodytes.[2]

Far from the darkness of caves and graves, the aquatic cousins of the ghoul lurk near hidden reefs or other places where ships are likely to meet their ends. These lacedons, or aquatic ghouls, are generally as quick and agile in water as they are on land.[1]

Similar to the ghoul, the extra-planar undead known as ghuls are unfortunate genies that are cursed to remain on the material plane, forever hungry for flesh.[11]

The strangest of the common ghoul variants, skavelings are ghoulish mobats that serve the urdefhan of Orv as terrifying mounts.[12] Smaller sootwing bats are created in a similar process and are often used by ghoul spellcasters as familiars.[13]

Festrogs are often referred to as "ghoul-dogs", and while they possess a dark hunger for flesh, they have none of the true abilities of a ghoul, instead possessing their own unique abilities.[14]

Both ghouls and ghasts inhabit the nightmare demiplane of Leng, and both are more powerful and bestial in appearance than their counterparts on the Material Plane. Unlike common ghouls, Leng ghouls have a canine snout and hoofed feet, and are uncharacteristically charitable toward strangers, whom they may aid in exchange for gifts of food. Leng ghasts consider themselves a separate race and are at war with the ghouls; they are much more feral and violent.[15]

Both the ghouls and ghasts of Leng are hated by gugs. Gugs go out of their way to slaughter Leng ghasts whenever possible, but have an irrational fear of the weaker Leng ghouls and nearly always retreat from the creatures.[15]

Paizo published a major section about ghouls in Monster Codex.