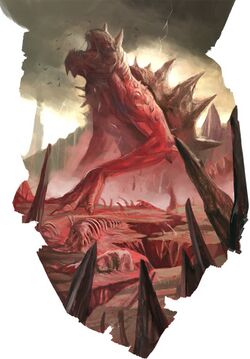 The Tarrasque rises from the Pit of Gormuz.

The Pit of Gormuz is a 20-mile-wide chasm located in the Windswept Wastes of western Casmaron. Over thousands of years, a dozen Spawn of Rovagug have emerged from the Pit to threaten Golarion, and legends tell that the god Rovagug himself is bound at the bottom of the Pit in time immemorial.[1][2]

The land around the Pit consists of cracked mud and sickly plants, swept by strange gales. The pit itself is a great chasm that stretches 20 miles from side to side. The pit appears impossibly deep, but those brave enough to peer over the edge claim to have seen a vague dull glow at the bottom that haunts their dreams afterwards.[3] In truth, the Pit is deeper than any have dared to explore. It descends 2 miles through two layers of the Darklands, cutting all the way to forbidding Orv.[4][5]

Locations within the Pit

The following are some of the locations within the Pit of Gormuz.

During the Age of Creation, an alliance of gods defeated Rovagug, imprisoning him within the Dead Vault far beneath Golarion's surface. The goddess Sarenrae repaired the gash in the earth into which the Rough Beast had been flung, and commanded her followers to avoid the smooth scar that remained. Her faithful living in nearby Ninshabur misinterpreted her instructions, however, and instead flocked to the area, eventually founding the settlement of Gormuz there. Believing Gormuz to be a holy city of Sarenrae, people from all over Casmaron flocked there for millennia, but were slowly corrupted by the imprisoned god Rovagug's dreams. Sarenrae continued sending portents and visions to her faithful in Gormuz during this period, but they were ignored or misinterpreted. She finally sent her herald Kohal to the people of Gormuz in -3923 AR, but they had been so corrupted that they destroyed him instead. In great wrath, Sarenrae smote Gormuz with her scimitar, destroying it completely, and created an enormous rent in the earth that eventually became known as the Pit of Gormuz.[6]

The Keleshite sultans claim that Gormuz was a holy man who guarded the pit for 1,111 years, only finding rest once the Age of Darkness had passed. Orc oracles maintain that Gormuz is in fact the name of the first of the spawn, and that the arrival of a dark comet will signify its return to life.[1]

The following are some of the Spawn believed to have emerged from the pit over the past few millennia.[3]

The Pit is naturally sacred to worshipers of the Rough Beast. It is an annual pilgrimage site for many of his local cults, who travel there to toss goods, slaves, or other valuables into the Pit as sacrifices, hoping to gain Rovagug's attention and favor.[4]