At the end of Season 7, all factions remained unchanged going into Season 8. 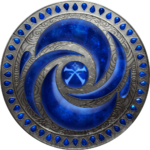 Year of the Stolen Storm badge

This season's metaplot details will be revealed after Gen Con 2016.

Culminating in a daring mission onto the comet Aucturn's Tear, the Pathfinder Society recovers the legendary Untouchable Opal, the millennia-locked prison of the zephyrous prince Ranginori, the good-aligned elemental lord of air. The boons of Ranginori in their sights, the society seeks out any means to crack open the artifact and set Ranginori free.

Destroying the opal prison would require powerful elemental earth, fire, and water, each pure enough to evoke the element’s fundamental nature. In pursuit of these reagents, agents traveled to the elemental planes, gathering allies and following leads to find these pure substances.

On the Plane of Earth agents establish new contacts, undermining an old foe, and recover a lost Pathfinder agent. On the Plane of Fire agents engage with efreeti high society, settling eon-old debts in exchange for valuable intelligence. Following the tracks of a thief at the Sothis Pathfinder lodge leads a group of agents from Osirion's deserts into the Plane of Air.

The Society finds its match with the Concordance of Elements, an organization devoted to balance among the four elements, but establishes a temporary alliance after defeating a mutual foe. With the concordance to aid them, the Society travels to the Plane of Water, where they are pressed into service protecting the plane’s largest city from an imminent invasion, securing the legacy of a lost demigod.

Finally holding samples of purest earth and water in their hands, the Society sends some of its best into a forge on the planar boundary between the planes of Fire and Earth to immerse the untouchable opal in pure flame and breaking the gem to grant Ranignori freedom.[1]

The following adventures have been announced as part of Season 7 but could change upon release.