This article is about the alghollthu species known as "ulat-kini" in the Alghollthu language. For the location of that name, see Ulat-Kini.

Skum,[1] once known as ulat-kini,[2] are an ancient race of green-skinned aquatic monstrous humanoids. They were created from human stock to serve as a slave race by the alghollthus. Skum are perhaps the best-known of such servitor races, and represent the alghollthus' ideal humanoid slave: strong, amphibious and easily controllable.[3][4] 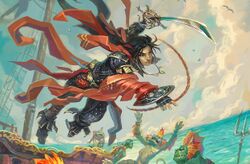 The proper name of the skum race is ulat-kini, after the research facility of Ulat-Kini in Sekamina where alghollthus first created them. The word skum was originally a derogatory term used by humans, but over time the ulat-kini themselves switched to using this name as they forgot their own racial name.[4][5]

As they were devising a servitor race, alghollthus recognised the usefulness of the humanoid form: humans breed quickly and leave behind various tools that can be used by humanoid slaves. With fleshwarping, alghollthus rendered human slaves docile with alchemical reagents and their own slime, and fused them with the organs of sea monsters. After centuries of work, which saw the deaths of an untold number of human slaves, the skum were created, and quickly became important members of the alghollthus' army.[5]

A typical skum stands half a foot taller than the typical human, but weighs nearly twice as much due to its increased muscle mass. Skum's rubbery flesh is protected by tough scales, fins, and spines, which also allow them to swim better. In order to allow them to live comfortably underwater, the skum's necks are laden with gills, and their heads were made from scratch to resemble those of fish. Skum have no external genitalia.[5]

A skum's skin is a mix of green, yellow, and grey; the darker a skum's skin is, the closer it is to its original heritage. Each also has a pattern of spots unique to the individual skum. Skum sorcerers, courtesy of their human blood, might have unusual skin colours.[5]

Every skum is born imprinted with a specific mental marker which can be seen via telepathy and identifies the individual alghollthu owner of that skum's lineage.[5]

In water, skum are docile filter feeders; they do not hunt and only consume meat after repelling an attack. On land, they become voracious and savage, as without plankton they are forced to hunt.[5]

Alghollthus gave skum no ability to reproduce on their own so they would not breed uncontrollably. However, they retain the ability to mate with human females, and either trade fish or treasures to human communities in exchange for human mates who would bear their children, or simply just kidnap human women. The offspring of these relations might either be skum, or greasy, sallow, deformed humans that will become adult skum when they die of old age. Alghollthus and some skum have the ability to accelerate this process, quickly turning an apparent human into a skum. Skum are biologically immortal; some are known to have lived since the time of the Azlanti empire, and are known as am-ulat-kini.[5]

Modern skum are divided into two groups: the "masterless" and the "loyal". The masterless, who were abandoned after Earthfall, live in tribes and inhabit abandoned alghollthu strongholds or locations associated with their final orders on the surface or in Sekamina. Each tribe is led by the oldest or strongest (usually one and the same individual), but the power structure is loose. Most such tribes have lost their military discipline and regressed to savagery, and live near the water, as the majority of landlocked skum tribes have starved to death due to the lack of plankton to feed upon. Most masterless are disgusted by their former enslavement and actively reject all kinds of masters, including religion and the gods, and discard the old possessions of their masters. Disputes are settled by non-lethal combat. Masterless tribes can still fall under an alghollthus's influence, but rarely remain so for long.[5]

In the Sightless Sea in the lowest depths of Orv, the loyal skum continue to proudly serve the alghollthus and maintain their magic and civility. During the millennia following Earthfall, they were subject to further fleshwarping and divided into various castes: the giant skum hulks that serve as menial labourers; the intelligent, bioluminescent skum prodigies who attend to their masters; the small, unintelligent skum ravagers used as watchdogs; and countless others.[5]

Skum view chuuls as akin to older siblings, but also fear them as predators. Chuuls do not seem to recognize a kinship, and eagerly prey on skum.[6]

Almost all skum live in the Darklands, especially in the settlement of Cold Momugado and the temple complex of Ulat-Kini in Sekamina's Lake Nirthran.[7] The only skum known to live on or near the surface are those that inhabit the ruins of the city of Drowning Stones in the Mwangi Expanse,[8] those that live near the ruined island of Nal-Kashel in Cheliax,[2] and those that live on the coast of Avalon Bay in Lake Encarthan.[9]

Paizo published a major article about skum in Turn of the Torrent.