The fabled sun orchid elixir[1] is much sought after for its ability to temporarily halt the aging process, restoring the drinker to the age of its race's young adults.[2] The secret of its creation was discovered by the Thuvian alchemist Artokus Kirran in 1140 AR.[3]

It is difficult and dangerous to make. The key ingredient is the nectar of the rare sun orchid flower. The flower can be found only in Thuvia's desert interior, regions infested by the corrupted genies known as divs. Orchid hunters must also contend with the local tribal leaders, known as Water Lords; many of these lords are little better than bandits.[4] 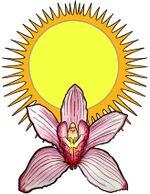 The symbol of Thuvia denotes the sun orchid.

By 1141 AR, a number of foreign nations were threatening to lay siege to Artokus's home city of Merab in order to control the scarce supply of the elixir. Merab turned to Thuvia's four other city states for aid, promising to share the proceeds of the elixir equally among them. The alliance was established in 1142 AR, and the Citadel of the Alchemist was constructed on the edge of the Barrier Wall in order to protect Artokus and his laboratories. Heeding the urgings of a priestess of Pharasma called Taladere, the rulers of the city-states agreed to forego the benefits of the elixir for themselves and their people. Instead, they decreed that the only Thuvian allowed to take the elixir would be Artokus himself. The rest would be sold to foreigners.[citation needed]

The supply of the elixir is rigorously controlled. Every year a blind, mute servant emerges from the Citadel with six vials. This is then transported to one of the five city-states for auction.[5] Selected foreign emissaries are invited to the host city to bid for a vial. The six highest bidders each get a vial; the losers get nothing but still forfeit the amounts bid.[6] However, the last two shipments have been lost due to apparent teleportation "accidents". This has damaged the young Emir of Pashow's standing, and some would like to see him replaced as ruler—perhaps by Ziralia, daughter of the ambitious Prince Zinlo of Aspenthar.[7]