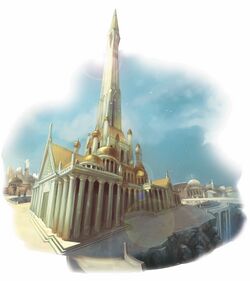 Arguably the holiest location in all the world, the Starstone Cathedral is a monument to divinity. The massive structure was created by Aroden when he raised the Starstone from the depths of the Inner Sea in 1 AR, and the relic is believed to rest within to this day. 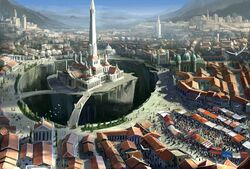 The Starstone Cathedral from above

The Cathedral stands on a stone column in the center of a wide and seemingly bottomless pit at the heart of Absalom's central Ascendant Court district. Four bridges span the chasm, each representing one of the four ascended gods who attained divinity at this site—in order of their ascendancy: Aroden (1 AR),[1] Norgorber (1893 AR),[2] Cayden Cailean (2765 AR),[1] and Iomedae (3832 AR)[1]—though the bridge for Aroden collapsed in a massive earthquake in 4698 AR after years of poor care by the dead god's aging clergy.

No one knows for certain what lies within the Cathedral itself, as only a few brave or lucky souls have returned from a failed attempt at the Test of the Starstone. Those who have entered the Cathedral and returned to tell of it describe a place where magic does not function properly and which regularly changes its configuration, challenges and guardians.[3]