The Arcadian Mariner's Lodge is a mobile Pathfinder lodge based on the retrofitted merchant ship the Grinning Pixie. It typically sails the Arcadian Ocean, along the western coasts of Avistan and Garund, exploring islands and searching beneath the sea for shipwrecks and Azlanti ruins.[1]

Its captain should be a Pathfinder appointed by the Decemvirate on a one- or two-year term, and the crew are expected to take part in missions in addition to their normal duties on the ship. Other Pathfinders may be assigned to the lodge for specific missions, or more rarely might be passengers bound for wherever the Grinning Pixie is headed.[1] Its current captain is Eras the Needle.[2] 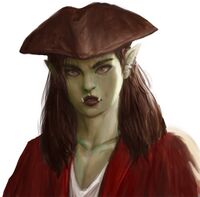 Its previous captain was Calisro Benarry, a half-orc from the Sodden Lands, who ran the ship for a decade ending in 4719 AR, in defiance of her contract with the Pathfinder Society by several years until being ordered (and paid) to surrender it.[3][4]

The lodge's library consists mainly of items recovered from locations the ship has visited. Most of the written records of the lodge's missions are sent to the Decemvirate whenever the ship docks, presumably to avoid the risk of them being lost in a shipwreck.[1]