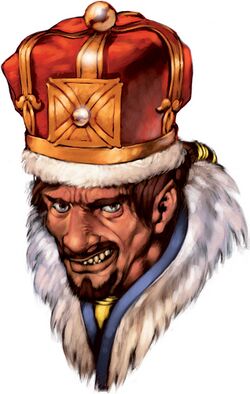 Divine right, also known as the divine right of kings, is the doctrine that rulers of nations (generally monarchs) do so because a deity has appointed them, or one of their predecessors, to the position, thus giving them political legitimacy.[1]

The belief in divine right is widespread throughout Golarion (particularly in the Inner Sea region),[2] and quite fervently held by the people of Osirion,[3] who claim that their first pharaoh, Azghaad I, was put in place by the god Nethys himself.[4] Other examples include the people of Minkai, who hold that the goddess Shizuru granted the five imperial families the right to rule that land.[5] In Tian Xia, in general, the belief is closely tied to the philosophy of sangpotshi, which states that everyone's place in society is guided by fate and determined based on one's deeds in former lives.[6]

In his broadsheet, On Government, the poet Darl Jubannich argued that the atrocities committed by House Thrune during the Chelish Civil War were enough to undermine the basic principles of divine right, thus laying the groundwork for both the Red Revolution of Galt and the People's Revolt of Andoran.[7]

The Red Mantis assassins refuse to accept contracts against rightfully appointed monarchs due to the divine right of kings, seeing them as the closest mortal approximations of the gods. This rule only applies to sitting monarchs, however, and other royals and nobles, as well as non-monarchist rulers, receive no such protection.[8]

Some people believe that because of their supposed divine origins, the blood of the enormous ox-like beasts of flame known as hadhayoshes can bestow divine right.[9]

In addition to being a political philosophy, divine right can also simply mean a person's or group's belief that something is guaranteed to them due to their position vis-à-vis a divine being, or simply because of enormous arrogance.[10]