Gearsmen are a class of humanoid-shaped robots who were brought out of the Silver Mount by the Technic League, who use them as guards and enforcers. They follow the League's commands with precision, yet occasionally disobey orders that contradict their original (still unkown) directives. Despite this flaw, gearsmen are the greatest find the League ever made.[1] 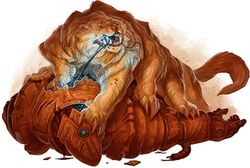 Gearsmen are bipedal constructs that seem to be built to resemble humans, albeit by a creator only tangentially familiar with human physiology. They speak in shrill, nearly identical voices, but generally only speak to issue warnings and commands. Few outside the Technic League have heard them speak, and they enforce the League's will with cold precision and efficiency.[2]

The gearsmen appeared a generation ago, brought forth from a previously unknown chamber in the Silver Mount in the Numerian capital of Starfall by the Technic League.[2]