This page contains spoilers for the following products: Wrath of the Righteous Adventure Path, especially The Worldwound Incursion.

N.B. This article details the Mendevian Crusades against the demons of the Worldwound; for details of the crusade against the Whispering Tyrant, see Shining Crusade 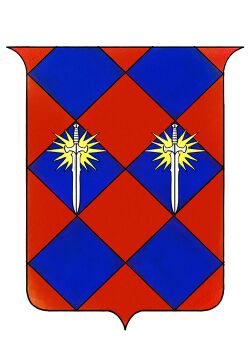 The Shield of Mendev

In 4433 AR, Aroden defeated a cult dedicated to the demon lord Deskari, driving the survivors into the Lake of Mists and Veils and making the north of Avistan safe from demonic influence. If so, this protection ended with Aroden's death in 4606 AR. Golarion moved into alignment with the Abyss, and the Worldwound was opened by the witch Areelu Vorlesh working in conjunction with her demonic patron, Deskari. Demons poured out, and overran the barbarian nation of Sarkoris. As the Worldwound grew ever larger, it came to be seen as a threat to the entire world.[1][2]

The remaining clerics of Aroden and the clerics of his follower Iomedae took it upon themselves to defeat the demons and seal the Worldwound. Thus the Mendevian Crusades were born.[1]

Even though warriors had been traveling to Sarkoris to battle the demonic hordes ever since the Worldwound opened in 4606 AR, the First Mendevian Crusade was not called by the Church of Iomedae (as well as other churches)[3] until 4622 AR. Its late start can be attributed to the general environmental and social upheaval caused by Aroden's death worldwide, and to the specific institutional hurdles the followers of Iomedae had to overcome with their patron's sudden rise in importance. The crusaders discovered upon their arrival, that most of Sarkoris and parts of western Mendev has already been overrun.[4] The governments of Cheliax, Isger, and Andoran, dealing with internal conflicts of their own, saw a way of ridding themselves of many dispossessed nobles and wandering mercenary companies, and joined the church of Iomedae in their efforts.[5] Their numbers and organizational strengths added greatly to the defending armies, and soon the demonic forces began to be pushed back towards the Northmounds. Having thus liberated all of Mendev and the Sarkorian lowlands, the crusaders offered to help build stronger defenses against future attacks. These offers were gratefully accepted by the Mendevians, but met with some resistance among the remaining proud (and historically independent) Kellid tribes of Sarkoris. With the demonic threat seemingly confined to the Northmounds and the defenses of both Mendev and Sarkoris strengthened, the Church of Iomedae officially brought the First Mendevian Crusade to a close in 4630 AR. Some crusaders made the long journey back to their homelands, but many stayed behind in Mendev to help defend the nation against any future attacks.[4][6]

In truth, this first demonic invasion was little more than the demon lord Deskari testing the waters, gauging the strength and tactics of his opponents before launching a full invasion. The brutality and disorganization of the early attacks were intentional, as they helped to reinforce the stereotype in the minds of the crusaders that their enemies were a leaderless horde, bent on pure destruction and rage, unable to cooperate and employ tactics effectively. During this time, many of the demons also used their teleportation abilities to leave the battlefield and settle in countless locations across Golarion, where many of them still lurk to this day.[6]

In 4638 AR, the demons counter-attacked. Forces led by the powerful marilith Zuhra Aponavicius captured the crusader city of Drezen and killed tens of thousands of Mendev's warriors and pilgrims.[3] The Second Crusade was called to combat this menace, but the generals quickly realized that they were no longer dealing with uncoordinated groups of fiends: they now employed tactics and were led by powerful demonic generals. The crusader forces fought bravely, but soon decided that they were not going to be able to drive the demons back. Instead they opted for containment and relinquished any hope of ever winning back Sarkorian land. They created the wardstones, massive monoliths capable of creating a nigh-impenetrable wall against demons, and placed them along the West Sellen and Moutray Rivers. This stopped the demonic advance at the borders of Mendev, Ustalav, and Numeria, saving the lives of tens of thousands in those nations; Sarkoris, however, was now lost for good. As the Second Crusade came to a close in 4645 AR, even though the wardstones were considered a great accomplishment, the crusade itself was deemed a failure by most.[7][6]

The creation of the wardstones greatly inhibited the demons' teleportation abilities, a tactic that Deskari had hoped to take greater advantage of during this time. Even though they only existed along the southern and eastern border of the Worldwound, the wardstones created a magical echo to the north and west. Not as powerful as the wardstones themselves, since the echo did not prevent the demons from physically leaving the warded area, this echo still prevented them from using teleportation to escape into the rest of Golarion. The Kellid barbarian tribes aggressive defense of their territories to the north and west of the Worldwound, combined with the irresistible presence of the Iomedaean crusaders, focused most of the demons' attention on the borders with Mendev, Ustalav, and Numeria.[6]

After the Second Crusade ended with the total loss of Sarkoris and the creation of the wardstones, there was a momentary lull in demonic attacks. The fiends spent their time consolidating their power within the new territories, and were dealing with increased attacks from the Realm of the Mammoth Lords. Once they turned their gaze south and eastward again, they decided to pursue subtler methods of infiltration, greatly facilitated by cultists of the demon lord Baphomet, who infiltrated numerous crusader organizations and churches. At the same time, the Mendevian Crusaders had been running out of strong recruits, and began accepting warriors into the crusades who had less than noble intentions. Faced with increasing corruption within their ranks, the Third Crusade was called, but quickly devolved into ferreting out demonic corruption through witch hunts. These pogroms grew increasingly paranoid and violent and also began targeting indigenous Kellid and Sarkorian animist faiths, until the Mendevian government finally shut down the crusade in 4668 AR.[7][6][8]

Route of the Crusaders

During the First and Second Mendevian Crusades, most crusaders made the journey up the West Sellen River, past the nation of Ustalav and the Sarkorian city of Storasta. When that city fell during the Second Crusade, most travellers decided to take the safer route through the River Kingdoms, past the Numerian city of Hajoth Hakados, and from there to the city of Chesed on the Lake of Mists and Veils.[9]

A new leader emerged amongst the demons in 4692 AR, a powerful balor known as Khorramzadeh, the Storm King. He and his forces were able to damage the Kenabres wardstone and cross the frontier, but were eventually driven back after the balor was almost slain by the dragon Terendelev. This worrying development led to the calling of the Fourth Crusade in order to defeat the Storm King before he had the chance to unite more of the demons under his banner. Lasting 15 years, this was the longest and most exhausting of the four crusades and ended in 4707 AR with a demonic retreat and the crusaders left too exhausted to press their advantage.[10][6][8] The Fourth Crusade also marked the appearance of the Order of Heralds, a knightly order tasked with reigning in the excessive purges and inquisitions of the Third Crusade. Their efforts were largely successful, although the cleansing fire of purity still glows the strongest in Kenabres to this day.[11]

The Fifth Mendevian Crusade rose from the stalled efforts of the Fourth, and was sparked by a demonic assault on Kenabres. Although demons ripped the city's defenses apart in minutes and destroyed its wardstone, a small group of defenders inadvertently gained the wardstone's mythic powers and led Queen Galfrey's defenders in what was soon called the Fifth Crusade.[12]

The ensuing five-year† campaign was the most successful of them all. The heroes slew the demon lord Deskari and ritually sealed the Worldwound, leaving only the Sarkoris Scar and what demons had been stranded upon the surface.[13]

The Mendevian Crusaders are less organized than other knightly orders, united primarily by their desire to eliminate the expansion of demons from the Worldwound. Not all of its members are selfless and honourable, but many epitomize true courage. Sheer desperation for able-bodied warriors causes the order to take shining knightly followers of Iomedae, as well as Hellknights, Pathfinders, and even lowly glory-seekers, ruffians, profiteers, and other undesirables.[14][15]

All crusaders nominally fight under the white-and-gold banner of Iomedae, or under one of the many flags of the knightly orders who make their home in Mendev. Because the crusaders are such a diverse group, however, hailing from all over the Inner Sea region, many companies have retained the symbols of their homeland. This means that any crusader stronghold is a riot of colors, with streamers and banners from hundreds of clans, counties, kingdoms, families, and orders competing for room. Some even create orders or noble titles out of whole cloth for themselves, hoping to elevate their status within the armies of the crusades, since it is impossible for the heralds of Iomedae to check the authenticity and provenance of every newcomer's claim. Whatever a soldier's banner may be, the ones the crusaders respect and desire the most are the ones earned on the battlefield. These take the form of one of the holy symbols of Iomedae: the sword, the shield, or the sunburst, and can be gained by soldiers of any rank or social standing.[11]