Baphomet (pronounced BAPH-oh-meh),[2] demon lord of beasts, mazes and minotaurs, rules over the Abyssal realm known as the Ivory Labyrinth.[3] A favored consort of Lamashtu,[4] he was created by her as the first minotaur to lead her creations in the mortal world.[3][5][6]

First of the minotaurs, Baphomet was born on Iblydos, the result of one of Lamashtu's vile acts. In life, he fathered numerous minotaurs and led his people to secret places across Golarion. When he died, Lamashtu took his soul and transformed him from petitioner to her hand-crafted consort. Gifted obscene gifts to please her, Baphomet was a relatively weak member of Lamashtu's court, but nonetheless cunningly used them to get rid of potential rivals, and over time accumulated magical powers.[7][8]

When he sought even greater favor from the Mother of Monsters, Baphomet raided Hell to steal Asmodeus's ruby rod. Unfortunately for him, he was caught, and Lamashtu denied relation to him. As punishment, the Prince of Darkness inscribed his own symbol on the minotaur lord's brow with the nail of his index finger and imprisoned him in a maze so cunningly crafted that Asmodeus declared it unsolvable.[9]

In this act, the Lord of Hell overstepped.

The cunning Baphomet not only solved the maze after only a decade, he stole the labyrinth itself from Hell, taking it with him when he returned to the Abyss. Returning far thinner but much wiser, Baphomet claimed this new realm for himself, and with this act established himself as a demon lord.[9][8]

The realm Baphomet stole from Hell, the Ivory Labyrinth, is the size of an entire world, spanning continents and an array of terrain, both natural and constructed.[10] The first maze encountered by visitors is always the Ivory Maze, after which the realm is named; the walls, ceilings, and floors of the hallways and chambers of this section are entirely covered with uncountable bones of every description.[9] Overall, the realm is populated by demons and secret societies of all sorts, especially by minotaurs.[11]

Baphomet appears as a large, emaciated, demonic minotaur, massive in size, with unnaturally large, blazing horns, glowing eyes and viciously sharp teeth. Although in life he had the head of a bull, over time it has become goat-like for an unknown reason. He wields Aizerghaul, a magical glaive crafted from a peculiar red adamantine, rumoured to deal particularly grievous wounds to beings of virtue. Runes are tattooed on his arms, and his clothing is adorned with numerous writings.[4][5][6] The inverted pentagram Asmodeus branded on Baphomet's forehead still burns.[9] Minotaurs often depict Baphomet as bull-headed, and he usually takes this form when appearing before them.[12]

Knowing that most other demon lords rose to power through sheer power and intimidation, Baphomet is cautious around them and prefers to destroy or turn them to his side with deception, seduction or blackmail. He respects his allies and is careful when working with more than one, in case their rivalries interfere with his plans. He has few enemies and not many rivals, and carefully plans to not have to fight more than one at a time.[8]

While Baphomet's devotion to Lamashtu has cooled since his elevation to demon lord, he has forgiven her for abandoning him to Hell, occasionally reprising his role as her lover, but no longer as her servant; Lamashtu in turns remains fond of Baphomet and sometimes intervenes when he asks.[9][13] He particularly values his alliance with Socothbenoth, his occasional lover, and frequently invites him to the Ivory Labyrinth to peruse goods and gifts.[14][12] Baphomet assisted Deskari, particularly in his efforts to expand the Worldwound, by directing his cults to corrupt the crusaders of Mendev.[15] Baphomet is enraged by Nocticula, and has no personal rivalry with Pazuzu but still opposes him to keep himself in Lamashtu's favour.[13]

Baphomet has not forgiven Asmodeus for his insults, and from his redoubt, he plots and builds his forces to prepare for a return to Hell, but not to steal from Asmodeus this time: Baphomet wishes to carve his own mark on the Prince of Darkness before consuming his soul. Asmodeus, however, only views Baphomet as a nuisance who outwitted him once.[8][13]

Baphomet believes that beast-headed, humanoid-bodied creatures are the perfect form and prefers similar creatures as his minions: labyrinth minotaurs, glabrezus, brimoraks, and half-fiend and fiendish minotaurs. Other demons in his service often have beast heads as well, but are no more or less powerful than standard examples of their kind. Many of them are his descendants, and some of his direct lieutenants are his children, including one he had with Lamashtu, though Baphomet keeps their identity secret. Inbreeding has concentrated Baphomet's power in some of his servants and resulted in deformities in others.[13] 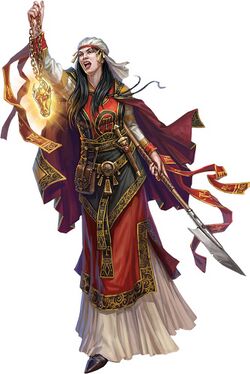 A cultist of Baphomet.

Despite Lamashtu's role as creator of the minotaurs, many choose Baphomet over her as their patron.[6] Increasingly, he is also venerated by humans, especially in rural areas where his secretive cults draw followers from those formerly faithful to Erastil.[4] In more urban areas, his cults are organized into secret societies along family lines, which have existed for generations, and whose members refer to themselves as Templars of the Ivory Labyrinth.[3] Prior to the Age of Lost Omens, they have had little opportunity to convert others to what was considered a 'beast cult', only followed by minotaurs.[16]

Since the death of Aroden and opening of the Worldwound, Baphomet has found a new opportunity to spread his religion, and today humanoids (especially humans) make up the majority of his followers. The Templars of the Ivory Labyrinth have increased in numbers and invariably wield no small amount of political power with the help of Baphomet's glabrezu minions.[16][5][17]

Baphomet is also one of the demon lords most commonly worshiped by orcs who tend to emphasize his mastery over beast and labyrinths whilst downplaying his traditional connection with minotaurs.[18] He also has a considerable number of antipaladins in his service.[19]

Some devotees of the Lord of the Labyrinth gain special powers by remaining motionless for nearly an hour, then speaking fifty observations of their surroundings through the hollowed-out horn of a bull.[9]

Paizo published a major article about Baphomet, as well as a Bestiary article, in Herald of the Ivory Labyrinth.