Aside from the demon lords, the dreaded balors are the most powerful of the demons of the Abyss. They are sometimes known as fire demons.[1] 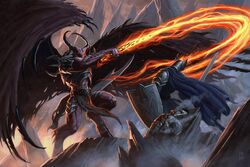 A balor striking down its mortal opponent.

All sins, taken to an ultimate degree of excess.[1]

The epitome of demonkind, a balor demon appears as a tall, horned pillar of flesh and fire. A typical specimen is 14 feet in height and weighs 4,500 pounds.[2]

As with most demons, balors are created from mortal souls. However, while one evil soul can create several lesser demons, it usually takes the souls of several powerful villains to generate a single balor.

Most balors act as the main generals of the various demon lords, leading vast armies of demons into battle on behalf of their masters. They are content to let their minions fight on their behalf, but relish the prospect of personal combat when challenged directly. They are generally only found singly or in the company of other demons.[2]

A balors usually fights with a flaming whip in one hand and a longsword in the other. It is somehow able to imbue both these weapons with the fearsome quality of a vorpal weapon, enhancing its already formidable melee prowess. The balor can also use its whip to entangle a foe and draw it within the reach of its deadly sword. They can also call upon a powerful suite of spell-like abilities that enable them to summon demonic allies, rain fiery death down upon their foes, or control others' minds. So great is the infernal heat of the balor that any who come close enough to strike the demon with their bare hands are badly burned.

If a balor is killed, it poses one last danger: its body explodes into an inferno of fire and unholy energy that engulfs everything within 100 feet.[2]

Some unusually powerful balors do not have a demon lord for a master. Instead these so-called Balor Lords rule in their own right. Only a true demon lord can command an entire Abyssal realm, but the greatest of the Balor Lords rule up to half of a realm.

Balor Lords are equivalent in might to the nascent demon lords and have abilities above and beyond those of ordinary balors. Some can heal themselves by slaying living creatures, others have additional spell-like abilities, and perhaps the most feared of all can inhale the souls of nearby living creatures, killing the victim and transforming its corpse into a babau, succubus, or shadow demon.[2] 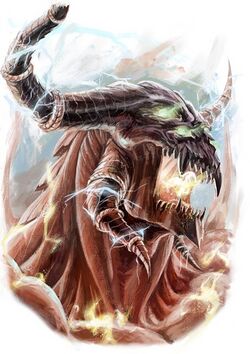 Khorramzadeh, the Storm King of Iz.

Like most demons, balors usually live in the Abyss.[2] It takes powerful magic to summon a balor to the Material Plane, and it is not to be done lightly. A balor views any period of enforced servitude, however short or stress-free, to be a personal affront and goes to any length to avenge itself.[1]

Balors rule many of the various petty fiefdoms that make up the Worldwound in northern Avistan. Arguably the most powerful of these is the balor Korramzadeh, also known as the Storm King, who rules the city of Iz. Unusually for a balor, his form appears to be bathed in lightning rather than fire. The Storm King seems to be gathering a growing force of demons to his banner, and the forces of Mendev have launched the Fourth Mendevian Crusade to check his growing power.[3]

Paizo published a sourcebook about demons called Demons Revisited, which includes a chapter about balor demons.