The marilith demons are the queens of the Abyss.[1] They are also known as pride demons or serpent demons.[2]

Mariliths are associated with the sin of pride.[2]

A marilith has the lower body of a snake, the upper body of a humanoid woman, and six arms. A typical specimen is six to nine feet tall, 20 feet from head to tail, and weighs 4,000 pounds. They have pointed ears and glittering eyes.[1]

Mariliths are formed in the Abyss from the souls of evil, arrogant, and cruel rulers and warlords.[1][3] When a marilith obtains command of cults or minions, it treats its servants with the same callousness and contemptuousness that they detest from their own superiors. This breeds the same sense of frustrated pride in a marilith's servants that spawned their lady, so that when they eventually die, their Abyss-bound souls seed the creation of new mariliths.[3]

A marilith periodically sheds its skin like snakes do, including the skin of its humanoid torso along with that of its serpentine tail. Mariliths, like other demons, are created at their full adult size and do not appear to do this to accommodate growth like snakes do. A shedding marilith can—and commonly does—alter her scales' patterns and coloration, her hair color, her eye color, and even the presence, extent, or designs of tattoos, however, which leads some demonologists to suspect that this behavior is tied to their sin of pride, driving them to constantly improve their physical appearance.[3]

Most mariliths serve the demon lords as generals and advisors, and are particularly common in the service of Abraxas[4] and Andirifkhu.[5][3] The snake god Ydersius was also served by serpent demons before his defeat.[6] Because mariliths are powerful demons in their own right, however, some carve out their own territories to rule.[1]

Mariliths commonly live alone or in pairs, though often with other demons as minions.[1]

A marilith can wield a weapon in each of their six arms as easily as if they were using only one. It also has several spell-like abilities, and can catch and crush foes using its powerful tail.[1] 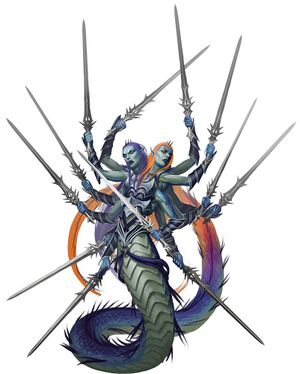 A powerful spellcaster can summon a marilith to Golarion and attempt to compel it into service, but such is the creature's pride that it is much harder to successfully bind it to a task that it finds unworthy of its talents.[2]

Mariliths rule a number of the petty fiefdoms that comprise the Worldwound in northern Avistan. The marilith Zuhra Aponavicius, ruler of Drezen, may be the most powerful of the Worldwound's demonic warlords, although the balor Korramzadeh (also known as the Storm King) has possibly surpassed her.[7]

Numerous other mariliths are active on Golarion. Among them are:

On other celestial bodies

Inaliningo, the Cloven Sister, is a marilith with an unusual forked tail who serves as one of Nocticula's chief lieutenants in the Moonscar on Golarion's moon.[6]

Paizo published a sourcebook about demons called Demons Revisited which includes a full chapter about mariliths.