The Shining Crusade was a decades-long war fought by the Taldan Empire, the dwarves of the Kingdom of Kraggodan, and the Knights of Ozem against the forces of the Whispering Tyrant of Ustalav. It began in 3754 AR and ended with the Tyrant's defeat and imprisonment in 3827 AR and the founding of the country of Lastwall the following year.[1][2]

In the 9th century AR, the wizard-king Tar-Baphon terrorized central Avistan. An immensely powerful necromancer, he followed the strictures of the Whispering Way, longing for immortality through undeath. He and his undead minions were so powerful that it took the power of the god Aroden himself to finally defeat him. In a mighty battle, the Last Azlanti slew the tyrant in 896 AR on the Isle of Terror in Lake Encarthan.[3][4]

Nothing was heard of the wizard-king for thousands of years, and all who even remembered the name Tar-Baphon believed him to be long dead and wasted away. Nothing could have been further from the truth. Through the power of his magic he was reborn as a lich in 3203 AR, now calling himself the Whispering Tyrant. Gathering his undead followers, he traveled north into what is now the Hold of Belkzen. There he unified the quarreling orc tribes by promising them the riches of the southern lands of central Avistan. By the end of that year, they had conquered Ustalav and brought its people under Tar-Baphon's control. He consolidated his rule over the next 600 years from the capital city of Adorak, and turning Ustalav into a byword for terror and decadence.[5][3][2][6]

Throughout the first four millennia AR, the Taldan Empire had used its Armies of Exploration to expand its reach beyond its capital in Taldor proper, and controlled most of the land in Avistan bordering the Inner Sea.[7] Deciding that the Whispering Tyrant presented a significant threat to further expansion, the forces of Taldor launched the Shining Crusade against the lich in 3754 AR.[2] Warriors from all over the empire rallied, converging on the Ustalavic town of Vellumis as a forward staging area. There they were joined by dwarves from the kingdom of Kraggodan and the well-known Knights of Ozem.[1] The alliance between the forces of Taldor and the dwarves of Kraggodan was secured through marriage and the dwarves forged a powerful, enchanted ring to seal the arrangement. General Shae Varitan, the bearer of the ring, soon gained a reputation for fortuitous accidents and good fortune.[8]

One of the leaders of the Taldan armies was the mortal Iomedae, who led the Knights of Ozem.[9][10] The forces of the Whispering Tyrant seemed endless, as any living soldier who fell in battle could simply be raised as an undead thrall and rejoin the fray.[11]

Over the next 26 years they brought their battle to the Whispering Tyrant, winning a number of conflicts, such as the Battle of Istavala Vale, before finally securing a beachhead on the northern shore of Lake Encarthan in 3801 AR.[2] During this time, crusaders were attacked on the lake by an omox called Jobox, the Corrupton Contained. The creature sunk numerous vessels, killing countless soldiers before it was imprisoned by the priest Niedevis.[12] Now in Ustalav proper, the crusaders battled the undead forces, slowly reclaiming villages, towns, and cities that had been under the lich's control for centuries. One such town was Vauntil, which was taken by the crusaders due to a stroke a luck. One of the Whispering Tyrant's most notorious and cruel generals was a vampire named Malyas, who had personally slain two Taldan generals: Sir Omorry Cheveith and Aenlyn Devvers. At the time the crusaders attacked Vauntil, however, Malyas was distracted by his personal vendetta to consolidate power amongst his kind, and therefore did not bring his army to the defense of the city.[13] 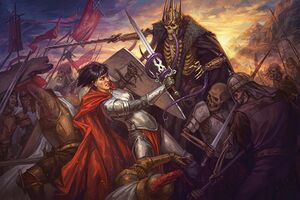 Then-mortal Iomedae and the Knights of Ozem battle Erum-Hel and his undead minions during the Shining Crusade.

Unlike the first time Tar-Baphon threatened the world, the god Aroden did not personally become involved during the Shining Crusade.[3] Instead, the Knights of Ozem summoned Aroden's herald, the warrior goddess Arazni, to fight in 3818 AR. She was sadly no match for the lich, and Tar-Baphon humiliated and killed Arazni in 3823 AR.[2] The entire crusade was thrown back by this terrible defeat, until Iomedae rallied the Knights and initiated a counterstrike that halted the undead legion's advance, and completely destroyed their vanguard at the Battle of Vaishali Pass.[14] Unwilling to give up their patron to the enemy, the Knights attempted to recover Arazni's corpse, eventually doing so at the Battle of Three Sorrows, where Iomedae battled Erum-Hel, Lord of Mohrgs.[15] Arazni was laid to rest in the crusader's keep, which would later form the foundation for the settlement of Vigil.[14][16]

In the final battle of the war in 3827 AR, the crusaders faced an overwhelming undead army. Tar-Baphon cast terrible magics upon his enemies, singling out the Taldan General Arnisant. The General was protected by a mighty artifact known as the Shield of Aroden, which absorbed the magics and then broke into a dozen pieces. One of these pieces embedded itself into the lich's hand and the Whispering Tyrant burned with a holy fire. Incapacitated, the lich's soul returned to the phylactery beneath his fortress-tower of Gallowspire. Unable to destroy the lich, the crusaders erected the Great Seal within Gallowspire, beneath which Tar-Baphon would be eternally entombed.[17] With the Tyrant's defeat, the war finally came to a close.[18] Any living orcs who survived the lich's defeat fled back north into Belkzen, where they fell back into tribal infighting.[11] The former living slaves of the immortal tyrant were returned to their homelands, freeing the peoples of Ustalav after centuries of servitude.[5]

Many of the lich-king's top lieutenants fled rather than face the final death on the battlefield. The vampire lord Malyas retreated to his home in Castle Kronquist with the crusaders hot on his tail. They besieged the castle unsuccessfully for a year before finally giving up.[13]

The victorious armies established a permanent garrison in 3828 AR and the alliance dissolved on friendly terms. The Knights of Ozem remained in the region to convert the nearest fortress into the city of Vigil to insure that the Whispering Tyrant's tomb could be watched for any signs of the lich's reemergence.[19] They named the new country Lastwall, declaring its permanent neutrality in all regional affairs in order to pursue their chosen duty.[1] On a more personal note, the centuries-long presence of orc troops in Ustalav led to the founding of numerous half-orc bloodlines in that nation that persist to this day.[20] In much the same fashion, Ustalav still is home to numerous sorcerous bloodlines that can be traced back to the titanic forces of good and evil who fought during the Shining Crusade.[21]