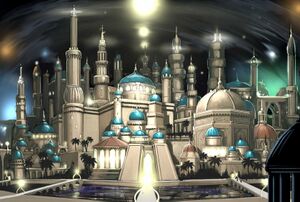 The Black Dome from within.

The Black Dome is a massive hemispherical structure that dominates the skyline of Osirion's capital, Sothis; indeed, it is the tallest building in the city.[1] It is the remains of the carapace of a uniquely gargantuan scarab beetle that has been modified to house the royal palace, the Palace of the Forthbringer, and the estates of many of the city's noble elite.[2]

The shell long pre-dates the founding of Sothis. According to the lore of the cult of Nethys, it belonged to Ulunat, a spawn of Rovagug who emerged from Pit of Gormuz in -3923 AR. After attacking the kingdom of Ninshabur in Casmaron, Ulunat laid waste to northeastern Garund, before being killed by Nethys shortly before he became a god.[2][3] Ulunat's blood is said to have caused springs and oases to spontaneously form, and within a few years, local tribes started seeking shelter from seasonal khamsin storms under its shell. These gatherings eventually led to a permanent population settling here and young Sothis was born.[2]

As Sothis grew and became more socially stratified, the area under the Black Dome became the exclusive domain of the upper classes. Eventually only the pharaoh, his family, the non-royal nobility, and foreign embassies were allowed to live under its shelter.[2]

The interior of the shell is decorated with magical faerie fire constellations. The Black Dome houses the Palace of the Forthbringer, the Council of the Sun and Sky, the Sothis Exhibitory, Menetnashte's Orrery, and the Shepeskan Grove of druid-tended saplings.[2]

Access to the public is strictly limited with only 100 people allowed into the interior per day.[4]