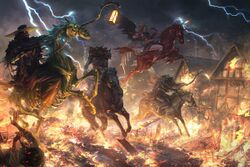 The Four Horsemen ride out with Charon on the far left. 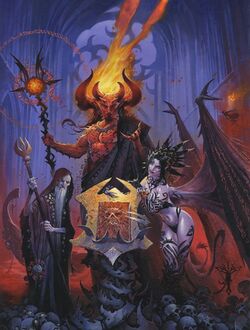 Charon (pronounced KAIR-unn)[1] is the Horseman of Death, an ancient and the most powerful archdaemon of Abaddon. He is the lord of the River Styx, and the ferryman for lost souls to the Outer Rifts.[2] Charon is served by his deacons: the thanadaemons.[3][4]

Charon was one of the four original Horsemen who betrayed their creator, the Oinodaemon, and is the only original Horsemen who has retained his title since the creation of the first daemons. He was responsible for signing the daemons' deal with Urgathoa and Zyphus that gave them the realm of Bloodrot in Abaddon.[5]

The citadel of Charon is the Drowning Court, which consists of hundreds of floating buildings tethered together, slowly revolving around a massive whirlpool. This whirlpool is both the source of the River Styx and the entrance to Charon's personal, secret domain. The Drowning Court itself is already the biggest of the Four Horsemen's domains, but Charon's reach is extended further by the River Styx, which pushes into the realms of other daemonic demigods; unclaimed areas in Abaddon; and parts of Hell, the Abyss, the Maelstrom, and Axis, all while retaining its link to Abaddon.[6]

Charon's typical form resembles that of a thanadaemon. However, since he is ancient enough to have predated humanoids, it is speculated that this is simply a form he adopted after discarding his original one, or is the mouthpiece for an alien creature below the waters of the Styx. Visitors to his personal demesne only feel Charon's looming, oppressive presence inside their mind, seeing nothing physical.[5]

Charon sees the newer Horsemen as junior colleagues, but once saw Lyutheria, the original Horseman of Famine, as a sister until Trelmarixian deposed and replaced her. He is most concerned with Trelmarixian's erratic behaviour and obsession with his own origins. Charon actively ensures that no one but the Horsemen are aware of any friction or disagreement among them, ensuring that they present a godlike, perfectly unified, and unassailable front to their subjects.[7]

Barzahk despises Charon due to how he represents the perversion of travel by leading souls into corruption and destruction, and always seeks to undermine him when possible.[8]