Grigs are tiny, cricket-bodied fey found in temperate forests throughout the world.[1] 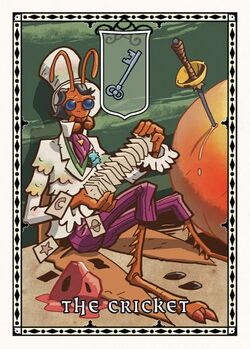 The Cricket card from a Harrow deck, represents grigs.

Grigs have the upper bodies, arms, and heads of elf-like humanoids, and the antennae, lower bodies and legs of crickets. Their hair is typically brown, silver, or green, and is usually worn loose and uncombed. The typically grig is a foot and half tall, and weighs less than ten pounds.[1]

Grigs typically live in thick, temperate forests. Their settlements are usually established near bodies of water, and feature a large clearing in their centers. Grig homes are often decorated with bright colors and pleasing imagery. Grigs have numerous holidays focused around the moon, during which they gather in the central clearings of their villages to observe the full moon.[1]

Grigs tend to be highly proactive about fighting evil and ugliness, but due to their small stature and physical weakness often place themselves in trouble when crusading. In combat, they prefer to avoid direct confrontations, and rely instead on their magic and longbows.[1] Grigs share a strong relationship with the similarly diminutive atomies, and the two types of fey often ally with one another.[2]

Grigs greatly appreciate art, especially music—which they can produce directly by rubbing their cricket-like legs against their bodies—and visual arts such as painting and sketching.[1]

Grigs live in forests throughout Avistan, typically ones already home to other fey. These woodlands include the Backar Forest of Molthune,[3] the Grungir Forest in the Lands of the Linnorm Kings,[4] and the Tickwood of Varisia.[5] Grigs also used to live in Shank's Wood, near the Tickwood, but most have been driven off by the local goblins.[6]

In addition to isolated forest settlements, grigs are also known to live in certain humanoid settlements. Grigs live in several gnome settlements in the Grungir Forest,[4] and some also live in the town of Uringen in the River Kingdoms.[7]

In Harrow decks, grigs are represented by the Cricket card.[8]

Grigs are among the servants of the Eldest Ng, in the First World.[9]