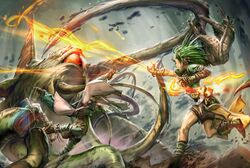 Sajan and Lini battle an alghollthu master in the Land of Black Blood.

The Land of Black Blood is the name given to the a vast cavern whose walls are coated in the dangerously cold black ooze known as black blood. It is located deep within the Darklands realm of Orv, roughly below the surface realm of Kyonin.[1][2]

This region has long been fought over, but no one civilization has ever been able to establish dominance.[3]

At one time, the followers of the bat-god Camazotz gained control of the Vault. This did not suit the purposes of the demon lord Abraxus, and his forces defeated those of Camazotz and removed almost all signs of the Bat-God from the Land of Black Blood.[4]

Large stretches of the walls of the Vault are covered in runes which bear testimony to the various races that have lived here. They have been carved in a dozen languages, by all sorts of creatures, from alghollthus to dark stalkers. Some of them are arcane glyphs. The content of the rest varies from warnings, to prayers, to claims of eternal rulership over the Vault.[5]

A race of half-amphibian savages, the charda, are the only indigenous species to live in the Land of Black Blood. Cowardly beings, these creatures thrive in the black blood, living off foul frogs and fish. If confronted, charda prefer to retreat, hoping to catch their enemies unaware and drag them to their dooms.[6]

A huge neothelid, known as the Moldering Emperor lives within an immense forest of mushrooms and other fungi called the Hanging Forest.[7]

Cloakers are known to directly or indirectly serve the Moldering Emperor. Most of them roost within the Hanging Forest, from which they gather fungi suitable for making potions.[8]

Other creatures that inhabit various pockets of the Vault include driders, deros, and even a few fiends and shaitans, who all vie to control access to the black blood.[9]

This is a marshy region on the northern edge of the Caltherium. It is overgrown with fungi and strange plants. It is popular with the charda, and is also used as a hunting ground by the Moldering Emperor.[10]

This was built upon an island in a flow of black blood by the drow.[10] It consists of a ring of five towers surrounding a central courtyard. The drow used it as a base for experimenting on black blood.[11]

A lake of black blood, the Caltherium's depths have never been plumbed by mortals.[10]

The cliff dwellings are groups of square houses in a western corner. They have been built eighty feet above the floor of the Vault. Many of them are protected by arcane wards, making them sought-after shelters. Fights over them are common, and as a result the floor beneath is littered with the bones of unsuccessful tenants. The dwellings are inhabited by, among others, vampires, goblins, and svirfneblin.[10]

Alghollthus have a favourite beaching spot on the eastern shore of the Caltherium, next to the haunted ruin known as the Crystal Plaza.[10] The Crystal Plaza consists of a circle of 30-foot-tall crystal archways. It was created by an unknown wizard, who was seeking a means of forming a gateway to the Abyss. Unfortunately for him, his early experiments succeeded beyond his wildest expectations, and an Abyssal creature was able to reach through and kill him. The locals avoid the site.[12]

This strange cube is covered in 10,000 glyphs. Legend has it that it was carved by a blind charda necromancer, and that they depict either the history of the charda race, or the secret behind the black blood. The truth of this has never been established. Those who try and read the runes sometimes become slightly unhinged, but in rare cases, can temporarily gain enhanced benefits from drinking the black blood.[10]

The Demonspire is a huge stone column at the eastern end of the Vault. It offers an unparalleled view of the Land of Black Blood, and is sometimes used for meetings by people who want to be able to spot anyone else approaching.[10]

Faceless Idol of the Hungering God

The enormous idol known as the Faceless Idol of the Hungering God stands in a northern corner of the Vault.[5]

This area, in the eastern arm of the Vault, contains hundreds of statues, carved by some unknown sculptor. Each lacks any facial features apart from a mouth, making them similar to the much larger Faceless Idol of the Hungering God. There is a shrine at the heart of the grove,[5] which is tended by a shaitan pasha.[13]

This Hanging Forest derives its name from the fact that its component fungi grow out of the ceiling above as well as from the cavern floor. The Moldering Emperor is widely believed to have its lair at the heart of the forest.[5]

This abandoned fortification once guarded the north-western approach into the Vault. It consists of four towers, two at each end of the narrow tunnel. Beneath the towers are hundreds of further chambers. Today chokers lurk within.[5]

Also known as the City of Piled Stones, Orgeshta has long outlasted its original builders.[5]

This area of soggy mud was once filled with black blood. It is dotted with charda buildings, sunk into the mud. Some of them have been abandoned by the charda and are now inhabited by even more sinister monsters.[14]

This is one name given to an island in the Caltherium.[14] The inhospitable island consists mainly of a wedge of sharp stalactites. It is the site of a disused temple to the demon lord Abraxas.[15]

Venderlash is the only area of the Vault which is consistently inhabited.[14]