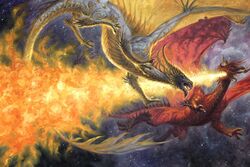 Although the full history of the Orbs of Dragonkind has largely been lost, incomplete lore places their origin during the original conflict between the draconic gods Apsu and Dahak and their followers. The dragons' slaughter of one another during their conflict led the draconic mother goddess Tiamat to shed ten tears, which landed on the slain bodies of heroes of each of the dragon species. The souls of these dragons entered the crystallized tears, transforming them into powerful artifacts that granted immense power and authority over others of their kind.[2]

The Orbs remained major figures in draconic history following the flight of Apsu and his followers through the Material Plane, becoming part of draconic hoards to be hidden away or used as tools to enslave other dragons. The Orbs have persisted into the modern day as both coveted and feared items among dragonkind, which dragons have killed one another to possess but allied to keep out of the possession of other races.[2]

The most significant property of the Orbs of Dragonkind is that they allow their wielders to magically control dragons. The wielder of an Orb can use it to exert powerful mental control over any dragon whose species matches that which the Orb is attuned to, effectively enslaving them to their will. Ownership of an Orb also grants immunity to the breath weapon of that dragon species, in addition to the ability of the wielder to use such a breath weapon three times per day. Further, someone using an Orb can detect the presence of any dragon within ten miles of their location, and of their Orb's particular variety within 100 miles.[3]

An Orb of Dragonkind also allows its wielder to communicate with any other person currently wielding an Orb of their own. As most such figures are dragons themselves, this exposes wielders to the risk of discovery and retribution by dragons enraged at the thought of a non-dragon enslaving their kin.[3]

The souls used to create each Orb remain within the artifacts. Although they are dormant most of the time, they can occasionally be awakened by exceptional individuals. However, the spirits within the Orbs are capable of enslaving those who would wield them to their own ancient wills.[4]

The following are some of the known or suspected Orbs of Dragonkind, or parts of them:

There are other, less powerful, Orbs of Dragonkind in existence and legend, for instance:[5]