Itinerant wanderers and peerless traders, witchwyrds wander between planets and planes, crossing unimaginable distances to trade in every corner of the Great Beyond.[1]

Witchwyrds are humanoid in appearance: they stand slightly taller than the average human at six and a half feet, and weigh around 300 pounds. Female witchwyrds tend to be shorter and have more angular features.[1] They are adapted to a desert climate: their hairless, lithe bodies easily shed heat, and their height keeps their head far away from the heat radiating from the ground. Witchwyrd skin is bluish-grey,[1][2] which scatters the light of a blue star to mitigate the harmful effects of ultraviolet rays.[2] Male witchwyrds' eyes glow an intense yellow, while females' eyes have a greenish tint.[1]

Despite being generally humanoid in shape, witchwyrds are quite obviously alien to Golarion; their strangest feature is their additional set of arms that sprout from beneath their shoulders. The upper arms have stronger muscle attachment points, rendering the lower arms weaker and less mobile; as a result, witchwyrds tend to prefer their upper arms in athletic tasks. Despite its distinctiveness, this feature is the easiest to conceal, as the witchwyrd's unique bone structure allows it to fold its lower arms away, easily concealing them beneath clothing. When they are not trying to blend in, witchwyrds wear outlandish, alien garb: normally lose fitting clothes in bright reds or yellows, topped with a distinctive conical hat.[1][2]

Witchwyrds have potent magical abilities and control over magic. They can 'grab' a magic missile directed toward them and absorb its energy, produce bolts of magical force to fire at opponents, and speak to any creature that has a language.[1]

Witchwyrds claim to have originated from Cyrune, a planet distant from Golarion, but refuse to reveal anything else about their homeworld. In ancient days, they settled numerous planets, and many of these communities eventually evolved into distinct species in their own right, most notably the kasathas.[2]

According to archaeological evidence, the witchwyrds have dwelled on Akiton since the Age of Serpents, before the planet's seas froze and Akiton became a barren desert world, where they lived in great cities of stone and metal. Surviving historical records include early transactions in the Hivemarket, illustrations of ancient Akitonian lifeforms and even accounts of Earthfall witnessed from afar.[2][3]

When Earthfall devastated Golarion, the Azlanti colonies on Akiton, cut off from home and support, went to war with the witchwyrds. The witchwyrds found themselves far outnumbered, but disagreed on what to do and separated into three† camps.[2][4] A small group submitted to the Azlanti and began to live among their conquerors,[2] a larger population built spaceships to found colonies across the solar system, and the largest group continued fighting and eventually evolved into the barbaric, nomadic shobhads.[2][4]

Despite their alien appearance, a witchwyrd's requires food, water, and sleep, and enjoy foods that humans would find extremely spicy.[1] Witchwyrds can instinctively sense, absorb and radiate background magic, which is processed and released in a semisolid aura that retains water and protects the witchwyrd. In heavily magical areas, witchwyrds can draw some sustenance from this magic, although doing so for more than a few days will lead to malnutrition.[2]

As constantly wandering traders, witchwyrds can be found on numerous planets and planes, though in the lands they visit they seem to prefer desert and tropical climates. They can be found anywhere that there are goods to be traded.[1] Witchwyrds are rarely encountered in large numbers but are a force to be reckoned in such cases. Legend has it that witchwyrds might return to Cyrune in the distant future, but for now they seem occupied by extraterrestrial prospects.[2]

Most witchwyrds prefer cosmopolitan cities where prejudice is non-existent, although a few prefer small towns where they can earn everyone's trust, particularly those located near ley lines that can provide sustenance. Witchwyrds prefer modest lifestyles to avoid attracting attention and make it easier for them to move away.[2]

Very little is known of witchwyrd society, as for the most part, witchwyrds seem to be solitary creatures. The only exception is when several of the creatures gather to trade in small enclaves. Almost nothing is known of how they procreate, with juvenile witchwyrds being a rarity, seen only in the company of more experienced witchwyrd traders. Some believe that the witchwyrds are ruled from behind the scenes by a mercantile oligarchy that directs all of their seemingly chaotic planar trade. There are rumours of fleets of witchwyrd trading ships, that sail across the planets and the planes as if they were water. Despite their solitary nature, witchwyrds rarely wander the planes alone, as they are protected by an entourage of bodyguards. These bodyguards are often strange creatures, as they are gathered during the witchwyrd's planar travels.[1]

Some witchwyrds respect or serve Jerishall the Turning Sphere, a primordial inevitable of the planes and planetary orbits, for their indirect patronage of space travel.[5] 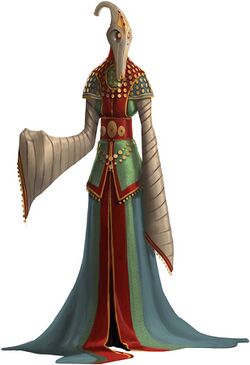 The only known grouping of these strange creatures on Golarion are the Pactmasters of Katapesh. Their true identity is a very closely guarded secret, as they wish for trade within their dominion to continue without interruption. They arrived in the Garundi city in 3725 AR in a plane- and planet-traveling ship, and quickly conquered the local bandit lords with the help of their constructs and minions. They have since been working diligently to expand Katapesh's trading prowess and their own fortunes.[6]

Individual witchwyrds living on Golarion by themselves are rare but not unknown, and include the skymetals scholar Cythrul in the Numerian city of Hajoth Hakados,[1][7] and the explorer Grekopek, who lives in Bloodcove in the Mwangi Expanse.[1]

Some witchwyrds also travel across planes to trade, including three-armed Vergiliux in the Shadow Plane,[8] and Jinvar the arcanist in Stethelos on the Dimension of Time.[9]