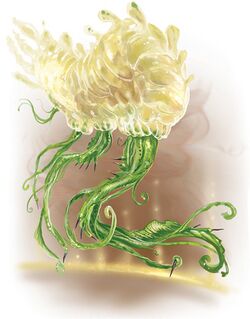 A Liavaran dreamer feeds from a ley line.

A ley line is an imperceptible, nearly stationary conduit of raw magical energy that can stretch thousands of miles, and includes psychic impressions among its ambient energy. Scholars suspect ley lines imbue magical effects, thoughts, and phenomena to reality along their paths.[1]

The concept of ley lines is part of the occult philosophy of cosmic biology, which suggests the planets of the Material Plane, and the material of other planes, is itself alive.[1]

Most ley lines are invisible to the naked eye, with the exception of those that pass through areas with high levels of ambient energy, such as areas of wild magic or negative energy. They move too slowly for most mortals to perceive, drifting only slightly over millennia.[2]

A person can detect ley lines through spellcasting and occult abilities, which reveals them as colored streams of ghostly energy. The line's power corresponds with its color, following a similar pattern to the visible light spectrum: violet lines are the weakest, and red lines are the strongest.[2]

Use in ritual magic

Ley lines can empower ritual magic by the ritual's primary participant tapping into one near the ritual's site.[2]

Liavara is so densely populated with ley lines that the Brethedan settlers sent to colonize the world entered meditative trances focused on the ley lines after their arrival. Becoming Liavaran dreamers, these more individualistic Brethedans fly into a rage if detached from a ley line but are capable of finding and feeding from them on Bretheda, and likely other worlds as well.[3]